“It's a whole new world"

Published on August 11, 2022
By Susan Christensen 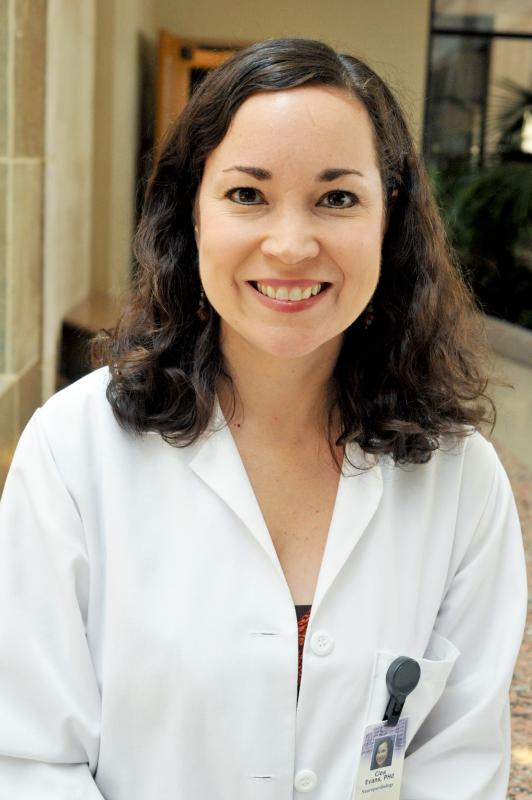 Clea Evans, Ph.D., director of the Neuropsychology Department at Methodist Rehabilitation Center in Jackson, says strokes can cause structural and neurochemical changes which may lead to a heightened risk of depression. “On top of this, the psychological impact of having a stroke can be devastating, shaking up their whole identity and sense of who they are and what their roles are in the home and workplace,” she said.

Before a December aneurysm led to two strokes, Angela South of Madison felt she could handle almost anything.

“I’ve always been able to spin four or five plates at a time,” said the 59-year-old former travel specialist for Vertex Aerospace in Madison. “I was leading the charge to get everyone up to speed on new software, and I was on a plane every other weekend.”

Now, it’s as if her whole life has been grounded and she doesn’t know how to cope.

“She tells me she wants to go to bed because she doesn’t want dark thoughts,” said her son, Lee Wilkins.

“It’s a whole new world,” South said. “I feel like I’m upside down on a merry-go-round, and I bang my head every time the horse goes down.”

Fortunately for South, her son noticed the symptoms of depression and anxiety and has been helping his mom seek treatment.

Not everyone is so fortunate. While post-stroke depression strikes some 30 percent of survivors, it’s far less recognized than physical symptoms such as paralysis or the inability to speak. Yet experts say it shouldn’t be surprising that a brain bleed or clot could have a psychological impact.

“Strokes cause structural and neurochemical changes to the brain, such that there may be biological reasons why they are more likely to become depressed,” said Clea Evans, Ph.D., director of the Neuropsychology Department at Methodist Rehabilitation Center in Jackson.

“On top of this, the psychological impact of having a stroke can be devastating, shaking up their whole identity and sense of who they are and what their roles are in the home and workplace.”

As Mississippi’s primary inpatient rehab facility for post-stroke patients, MRC has proven protocols to quickly identify symptoms of depression and anxiety. “We use a structured questionnaire, clinical interviews and our own judgement,” Evans said.

Sometimes, it’s obvious who’s having a hard time. “It just looks like a feeling of hopelessness or helplessness, and the patient doesn’t see the benefit or point of therapy,” Evans said.

Other times patients don’t want to admit they’re struggling.  “They might say no because of the stigma of perceived mental health problems,” Evans said. “Sometimes you can open the door to talk if you use terminology like frustrated or stressed.”

Once the problem is diagnosed, the next step is finding the right treatment.

“We work at the bedside to help educate patients about post-stroke depression and anxiety and help them identify healthy coping strategies to target negative thoughts and depressed mood,” Evans said.

If patients don’t progress, pharmacologic treatments are considered. “We will add a typical anti-depressant such as Zoloft or Celexa,” said Dr. Hyung Kim, chief of the Division of Physical Medicine & Rehabilitation at the University of Mississippi Medical Center and a MRC physician. “Given their low side effect profile, we tend to add anti-depressant medications more often than not and most patients tolerate them well.”

Kim said depression sometimes improves just from participation with therapies. But the key word is participation. It often falls to the therapy staff to find the right approach to keep patients engaged.

“Sometimes providing encouraging words on a daily basis is enough to keep a patient’s moods lighter,” Kim said. Not everyone, though, is receptive to cajoling.

“Some are angry, some are sad and some are withdrawn. You treat them as they present,” said Tanya Rogers, a physical therapist assistant at MRC. “Sometimes you see improvements, and you teach them how to work around their deficits.”

Therapists say it can help to incorporate favorite activities into therapy sessions—whether it be baking a favorite recipe or doing art projects in occupational therapy.

MRC physical therapist Pat Cooper said some patients like to incorporate spirituality into their sessions. “If they can fall back on their faith, it will help them get through it,” she said.

Another strategy is to help patients adopt the long view. “I tell them it’s still early, and they will continue to get better,” said MRC physical therapist Veronica Taylor. “This is not the end of their story.”

“I like to say everyone prior to stroke has strengths and weaknesses—strokes just give you a new set and you have to learn to adapt,” Evans said. “It can be a long journey to rediscover a satisfying sense of self and achieve some level of satisfaction again.”

Since MRC has outpatient facilities in Ridgeland and Flowood, many of its hospital patients are able to continue their recovery long-term.

And for those who desire peer-to-peer counseling, the hospital hosts a monthly support group meeting in conjunction with the University of Mississippi Medical Center Stroke Center, St. Dominic Health Systems and Baptist Medical Center.

South made her first visit to the group in August and was encouraged by the speaker’s story of his own post-stroke recovery. “I feel like it’s been of great value,” she said. “There were several things he said I’ve made a note of.”

The Citywide Stroke Support Group meets the first Friday of each month (except July) in the second floor BankPlus Conference Center of Methodist Rehabilitation Center, 1350 East Woodrow Wilson Ave., Jackson, Miss. The 2 to 3 p.m. meeting is open to family members and caregivers and also is available via Zoom. For information, call Methodist Rehab education nurse Tritasha Jones at 601-364-3575. 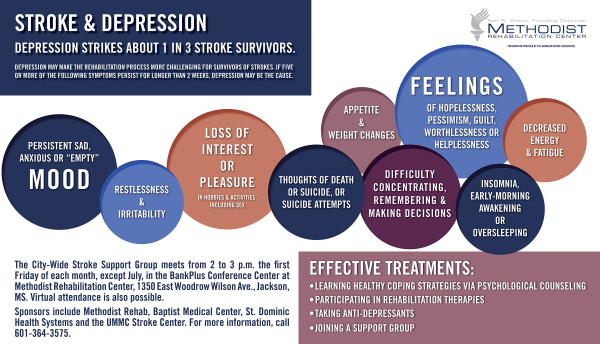