Morton teen celebrates being back on feet after crippling stroke

Published on October 17, 2022
By Susan Christensen 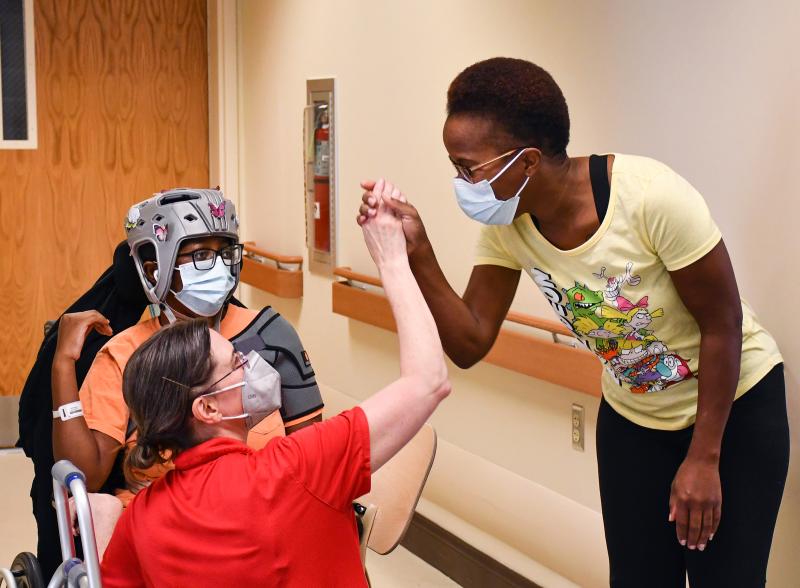 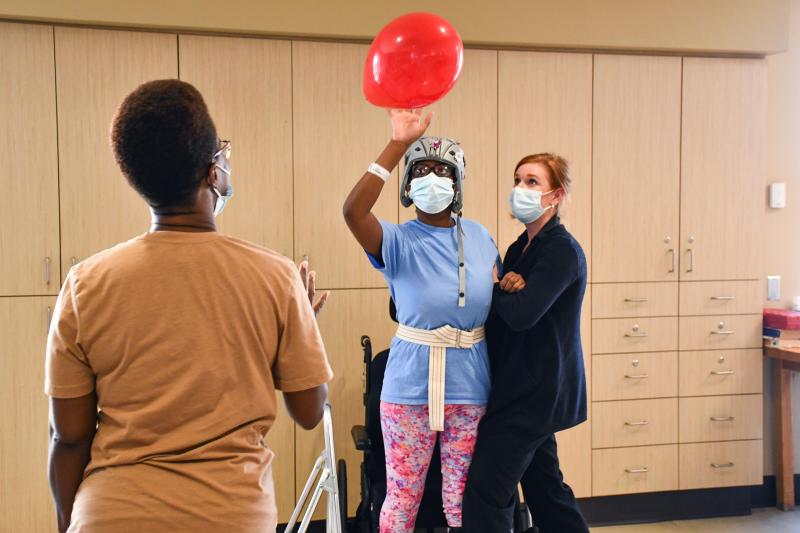 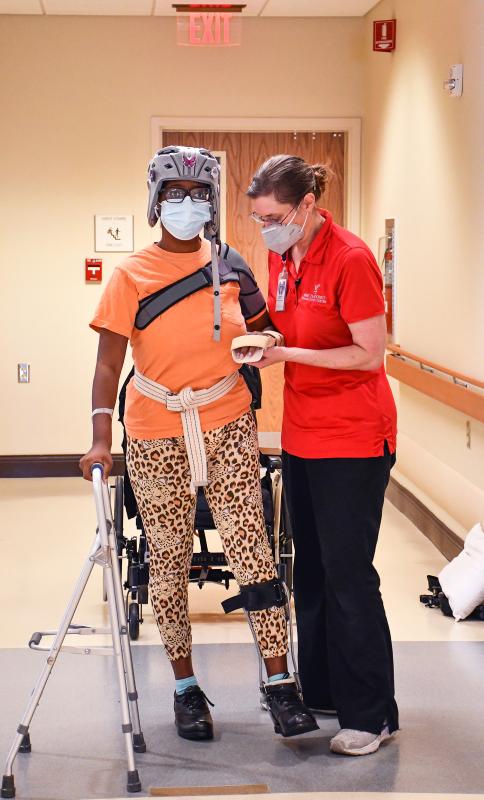 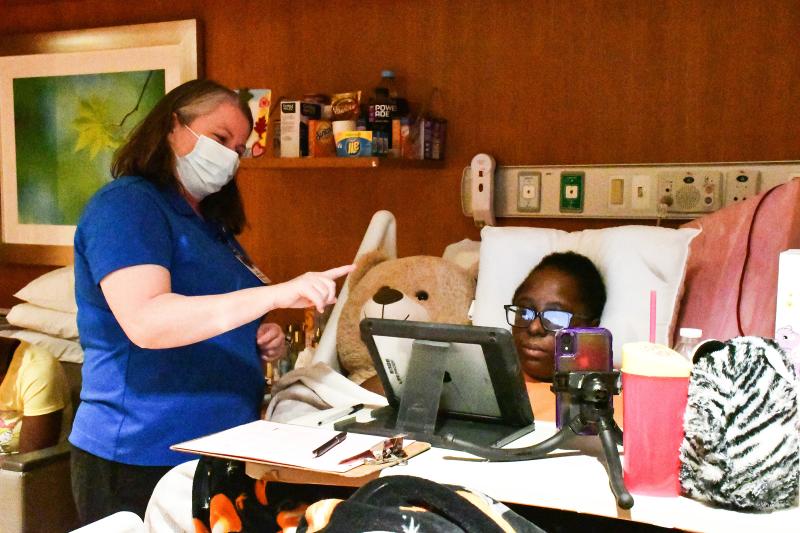 And there was a whole lot of clapping going on during her month there. The 19-year-old nursing student wowed everyone with her comeback from a crippling stroke.

“It’s pretty incredible to see how much progress she has been able to make,” said Skylar Menist, an occupational therapist at the Jackson hospital. “At first, she was like a newborn baby. We had to put a neck brace on her so she could hold her head up.”

“She needed 100 percent assistance to sit on the edge of her bed and maintain her balance,” said MRC physical therapist Kathleen Dobbs. “She had no control of her head or trunk and no movement in her left leg.”

Now, she can stride 150 feet in a straight line with the help of a custom brace made by Methodist Orthotics & Prosthetics, a one-sided walker and some assistance. “And there’s no doubt in my mind that she’ll continue to improve,” Dobbs said.

Hunt suffered a blood clot in her brain on July 27. At the time, she had strep throat and thrush and was experiencing vomiting and diarrhea. Her mom, Ylanda Townsend, rushed home to take her daughter to the doctor and found an ambulance in her driveway.

Hunt had collapsed and plans were to take her to the closest hospital—until an EMT noticed a frightening symptom.

She asked: “Has your daughter always had a droop to the left side of her face?” When Townsend answered no, the EMT decided Hunt needed the Level 1 care of the University of Mississippi Medical Center in Jackson.

“I’m so thankful for her paying attention and noticing,” Townsend said. “She called ahead and said she possibly had a stroke victim.”

Hunt is fortunate her symptoms were not overlooked. Strokes are hardly the first thing that comes to mind when a teen is seriously ill. “When I was over at UMMC, I woke up and my sister said I’d had a stroke,” remembers Hunt. “I was thinking: WHAT?”

The Centers for Disease Control say one in seven strokes occur in people ages 15 to 49. Experts think younger people are having more strokes because of rising risk factors such as obesity, high blood pressure and diabetes.

Hunt may never know exactly what caused a blood clot on the right side of her brain. But when she arrived in the ER, she had a dangerously high blood sugar level, indicating undiagnosed diabetes.

In addition to her young age, Hunt stood out on MRC’s stroke floor due to her butterfly-bedecked helmet. She wears the protective gear because a portion of her skull was removed to give her swelling brain room to expand. She added the butterflies to be her sassy self.

“One thing I’m thankful for is the stroke did not affect who she is,” Townsend said. “She is outspoken, bubbly, gets along with everybody and doesn’t meet a stranger.”

Still, Hunt was initially intimidated by her therapy team. “I had to get used to them,” she said. Now, they’re on nickname basis. “I call her chickadee,” Menist said.

“She has gained a lot of mamas and aunties,” Townsend said. Yet in the therapy gym, Hunt did not get any coddling.

“We don’t play,” Dobbs said. “She’d set a goal, and I’d accomplish it,” Hunt added. She said the best moments were when she was able to move her left leg and arm and got back vision in her left eye.

“The only thing she really struggled with was eating,” Townsend said. Like a lot of stroke patients, Hunt had swallowing problems that put her on a diet of chopped food and thickened liquid. But sessions with speech therapist Lisa Dowden helped her recover. “Now she can eat anything she wants,” Dowden said.

As she prepared to leave MRC, Hunt was looking forward to home-cooked favorites like macaroni and cheese, dressing and some big southern breakfasts.

Not that she’s needed more treats. The teen touched many a heart, prompting an outpouring of gifts from her caregivers. MRC registered nurse Montica Wilson added a Care Bear to Hunt’s already extensive bear collection and brought her made-from-scratch macaroni and cheese.

“We just connected,” Wilson said. “I’m like her older sister. I think she thinks I’m supposed to spoil her.”

Townsend said MRC therapy tech Walter Jackson also reached out. “He was like a grandpa, and we bonded with him,” Townsend said. “He came to her room every morning to say a prayer with her, and he made her a scrapbook with prayers in it.”

Townsend kept her daughter encouraged, as well, rarely leaving her side. When she needed a break, Hunt’s 20-year-old sister, Uniqueka, stepped in. “She has been amazing,” said her mom. “Anything Shay needs done her sister knows how to do it.” She even made Hunt a T-shirt that said Stroke 0, Jesus 1.

Hunt still has much healing ahead and hopes to continue her recovery via Methodist Outpatient Therapy in Flowood. Her ultimate goal is to return to her nursing studies at East Central Community College in Decatur. “I want to work with babies,” she said.

For now, though, she’s anticipating being babied herself as she returns to the family nest.

“I’m looking forward to sleeping in my own bed, getting some good cooking and being around my family again,” she said.