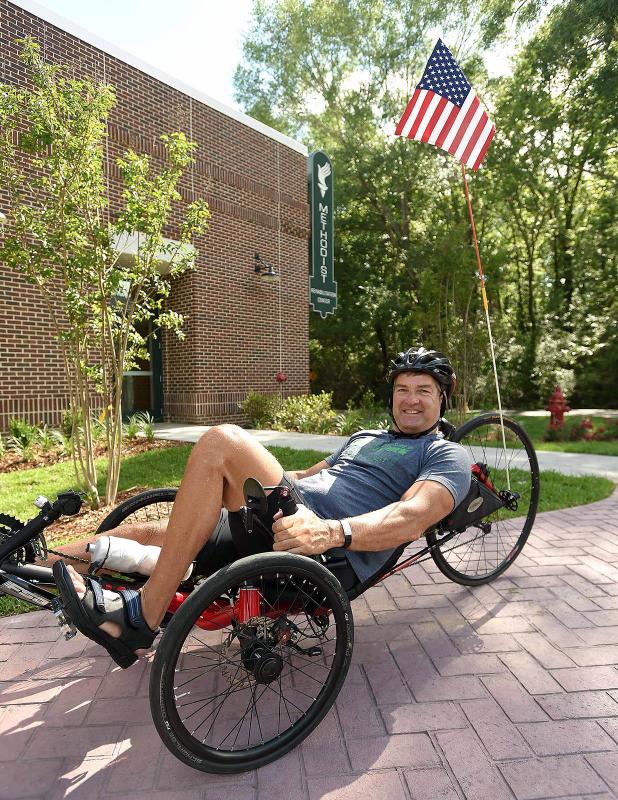 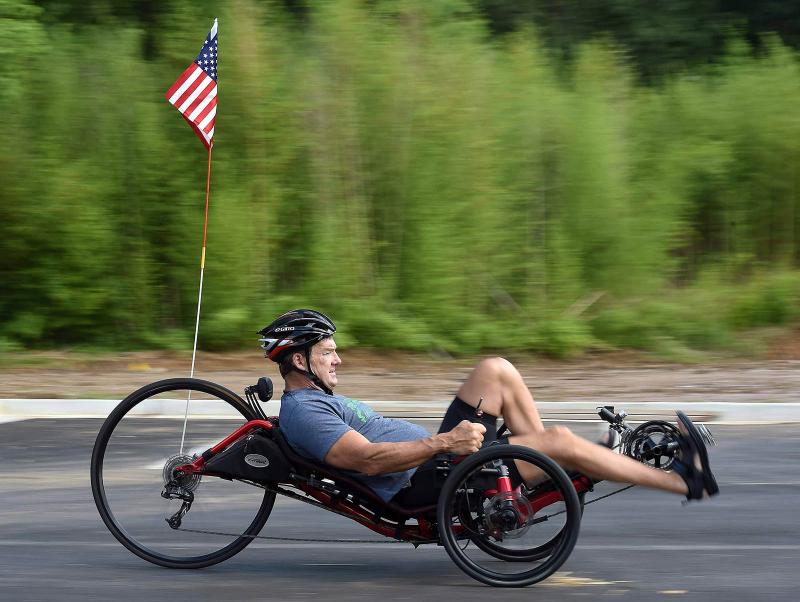 Riding a recumbent cycle has been a great way for Robert Tierce to recover from the spinal cord injury he sustained from a gunshot wound in August 2015. 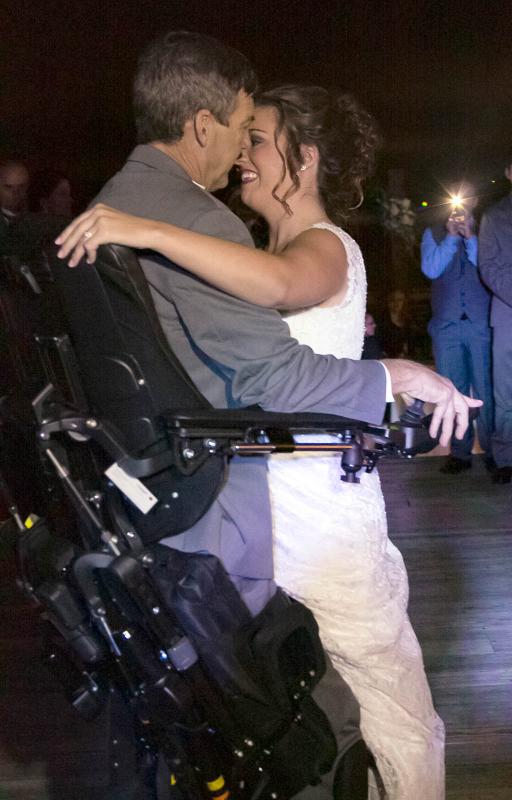 Using a borrowed standing wheelchair, Robert Tierce was able to have his dance with daughter Robin Maberry at her wedding.

For a seasoned cyclist like Robert Tierce, riding the 60-some-odd miles from his Ridgeland home to Kosciusko may not sound like a Herculean task.

But now, it is quite a feat. Nearly two years ago his right leg was completely paralyzed by a spinal cord injury from a gunshot wound.

Tierce made the jaunt using a recumbent bicycle, which places the rider in a reclining position.

“Instead of riding about 20 miles an hour like I used to, I can ride the recumbent about 10 miles an hour,” he said. “That’s my therapy. I try to ride about 100 miles a week.”

Tierce is training for the Mayhem Century Ride, a June 10 event presented by Ridgeland’s The Bike Crossing. Proceeds from the event benefit stroke research at Methodist Rehabilitation Center, where Tierce recovered from his spinal cord injury.

“I had to stop at the first rest station when I did the ride last year,” Tierce said, adding that he plans to go further this go-round. “I hadn’t been back to riding very long at that point. Now, I can probably ride for six or seven hours, but my pace is slow and steady, so it’s time-consuming.”

The recumbent bike helps Tierce maintain his balance, one of many ways the former railroad engineer has learned to adapt to life after his injury. He left MRC’s inpatient rehab in September 2015 using a wheelchair. At the time, it seemed he would need to adjust to that lifestyle.

“At MRC, they teach you how to manage life with a disability, and they do a good job with it,” Tierce said.

“Sometimes, when something like this happens there’s not just a fix, you have to wait and see,” said Tierce’s wife, Paula. “They prepared us to come home and to resume life.”

“We started using the body-weight supported treadmill, as it allowed for a safe environment initially for two physical therapists to assist him with repetitive stepping,” Howard said. “We were also using the overhead lift system at the hospital to help transition him to early over ground standing skills.”

But suddenly things took a turn for the worse for him.

“At first, I didn’t suffer major paralysis, but after about a week into rehab, I developed complete paralysis in the right side and a little bit in the left,” Tierce said. “It’s kind of bizarre how that worked out. I was in there working hard, and then everyone was just scratching their heads as to why I had such a setback. It was very frustrating.”

“He was definitely making progress,” Howard said. “But as his discharge date approached, weight-bearing activities became more difficult. And when we re-tested him, some of his muscles had in fact gotten weaker. That usually doesn’t happen.”

After leaving inpatient therapy, no recovery seemed in sight.

“When we first got home with him in the wheelchair, I was prepared for that to be how it was going to be now,” Paula said. “I thought that if we could just get him using a walker, that would be great.”

At that point, the Tierces had even considered risky surgery to remove the bullet that was still lodged in his spine.

“As I understand it, there could be just as much trauma taking the bullet out as there was it going in,” Tierce said.

They decided instead to continue therapy at MRC’s outpatient facility in Flowood.

“When he first got here, he was not able to stand at all, and he was planning his daughter’s wedding,” said his physical therapist, Lisa Indest.

Tierce was determined not to miss his father-daughter dance. So Indest helped work out a loan of a standing wheelchair from Allison Fracchia, a former MRC therapist who now works for the wheelchair company Permobil.

“When it was time for our dance, I was able to lift myself up to a standing position and dance,” Tierce said. “It was a very heartwarming moment for everybody there. I was very grateful for that.”

Not long after that, Tierce began a speedy recovery that surprised everyone, bolstered by the therapy techniques Indest employed.

“He made really great strides,” Indest said. “That first three to six months, the recovery and outcomes are uncertain, but it’s pretty remarkable the return in function that he had.”

Under Indest’s care, Tierce continued many of the therapies he began as an inpatient. He returned to using the body weight-supported treadmill system. He also benefited greatly from functional electrical stimulation (FES), using a combination of a FES exercise cycle and the Bioness neuro orthotic device. FES prevents muscle atrophy and increases cardiovascular endurance.

“He really liked to use the FES bike because cycling is his passion,” Indest said. “It was extremely motivating to him to see how he could progress with that. He always went the extra mile and wanted to stay at therapy longer than he had to. He even got an older e-stim bike to use at home. It was a dinosaur—but he used it on his own.”

Tierce’s persistence began to pay off.

“I went about three months without movement, but then I finally saw some recovery in my right side,” Tierce said.

“I came home from work one day and he said, ‘Look what I can do,’” Paula said.

“I was sitting on the couch and I could finally lift my leg up,” Tierce added. “That was a major deal!”

From that point, his recovery took off.

“I would tell him that in a week or so we would start to try using a rolling walker, and the next time he would come into therapy already using one,” Indest said.

“She was always surprised when I’d come in and show her a new trick,” Tierce said. “After the walker we did braces—and that wore me out. Now I can walk a little without anything, but I’ve still got some balance issues.

“I’ve still got the wheelchair, and a rollator, a walker, braces, a walking stick—and I use every one of them. Everything has a specific purpose for what I want to do.”

The Tierces say they’ve been grateful to find a place like MRC so close to home.

“Your first instinct is, ‘Where do I go to get the best treatment?’ And I don’t think we could have gotten any better treatment anywhere else,” Paula said. “I feel like Robert worked with the best possible therapists from the time we first came to MRC to the time we left outpatient.”

Tierce continues to improve, carrying with him what he learned during his time in therapy.

“Robert’s a very, very motivated person. Even though he’s not in rehab anymore, he’s still at it on his own every day,” Paula said. “I never, ever, ever dreamed he’d come this far. He is a walking miracle.”

“Spinal cord injury care begins at the scene” Methodist Rehab physician says rescuers helped Delta farmer avoid paralysis after truck v. tractor crash
'The Lord was watching out for me': Flora hunter grateful to be walking again after suffering several fractures in 22-foot tree stand fall
Country strong: Through therapy at MRC, Kalyn Smith strives to get back to the farm, back to college and back in the saddle after a life-changing horse-riding accident
‘I didn’t think I was going to live’: Coast retiree learns to adapt after paralyzing tree stand fall
Former Ole Miss running back tackles quest to walk again with trademark determination
Stepping up: Dr. Jennifer Villacorta named Methodist Rehabilitation Center’s new medical director
High achiever: MRC physical therapist receives 2019 ASIA Research Award
Faster and better: Methodist Orthotics & Prosthetics offers free screenings for Bioness L300 Go, an advanced neuroprosthetic device for controlling foot drop
‘I did what I was supposed to do’: Meridian athlete Alixus Hearn sets goals, gives it her all to overcome paralyzing spinal injury
‘Such a blessing’: For spinal cord injury survivor Brad Stubblefield and wife Kristan, having children has brought joy along with a unique set of challenges
Web design and hosting by U.S.NEXT