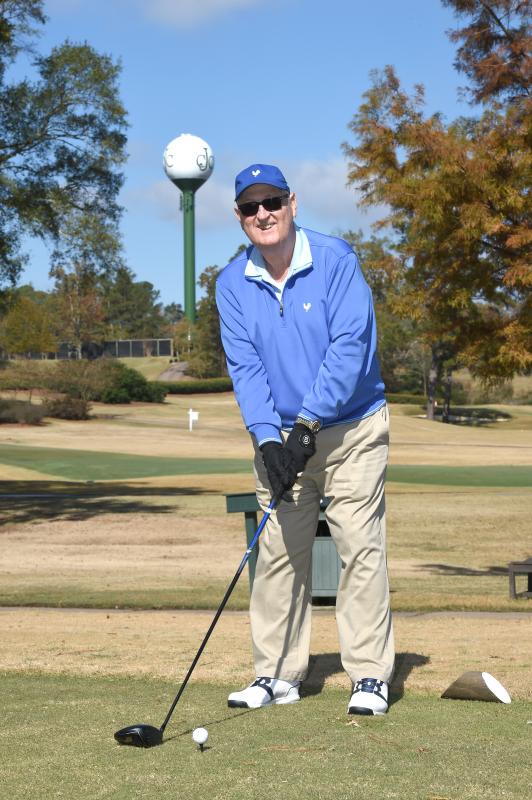 John ‘Bones’ Cossar now relishes every moment he spends golfing at the Country Club of Jackson. After a paralyzing reaction to a cancer drug, the chairman emeritus of Mississippi Valley Title Insurance in Ridgeland feared he might have to put away his clubs. But after months of therapy at Methodist Rehabilitation Center, he made a triumphant return to the tee box. Photo/Chris Todd 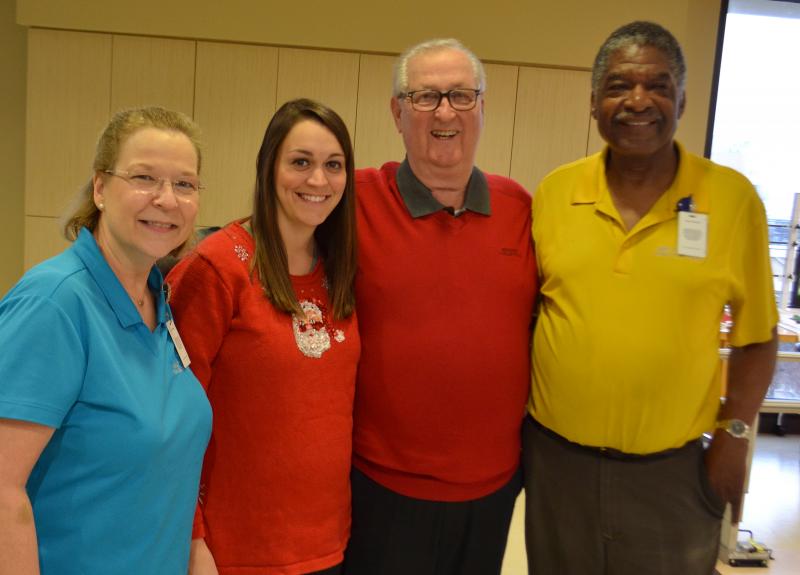 John “Bones” Cossar has been flaunting his golf scorecard lately.

But it has nothing to do with proving whether he eagled, birdied or parred.

For Cossar, just making it to a tee box is evidence of an evolution he feared he’d never make. Just nine months ago, he couldn’t move a muscle, let alone swing a club.

“Every muscle in my body was paralyzed,” said the chairman emeritus of Mississippi Valley Title Insurance in Ridgeland. “I couldn’t wiggle a finger. I couldn’t breathe. I couldn’t swallow. I was on a breathing machine and a feeding tube.”

“I thought I was going to die. I was getting worse every day.”

It took 70 days for Cossar to turn the corner health-wise. And as he readied for a transfer to Methodist Rehabilitation Center, he’d already decided on his therapy goals.

“He was adamant he was going to play golf again,” said Sarah Boyd, his occupational therapist at MRC’s Jackson hospital.

Cossar had a long way to go to reclaim his former lifestyle. Prior to January 2018, the then 79-year-old led an active life. In addition to golfing and visiting the office regularly, he ushered at church and often went boating behind his Lake Cavalier home.

A cancer scare in December 2017, prompted a couple of surgeries. But as 2018 began, Cossar seemed to be on the mend—until he had a devastating reaction to a cancer immunotherapy drug.

Following his second dose of the drug on Feb. 19, Cossar began a downward spiral that landed him in ICU for six days. Altogether, he would spend three and half months in inpatient care.

By his 80th birthday on May 1, he had lost 40 pounds and all his muscle mass. Yet he still found reason to celebrate. On that day, he got his wish to begin therapy at MRC.

“Mississippi is so blessed to have this wonderful facility,” said Cossar, who was friends with the late Earl Wilson, MRC’s founding chairman.

“Until you need it, probably 90 percent of people don’t realize what a jewel we have. Everybody there, from the first people you see, you know they are there to help you.”

Given Cossar’s debilitated condition, everything he did required “significant assistance,” Boyd said. “He needed complete help via our lift system just to get out of bed.”

His initial therapy focused on building his strength and endurance. And due to his hard-driving personality, he had some trouble letting his therapists take the lead.

“He was used to being the boss, and he had to let others be his boss for a minute,” Boyd said. “He was very much set in his ways when we tried to get him to do something new. But he would try it most of the time.”

“Bones likes to live life on his own terms,” agreed MRC physical therapist MaryJo Pride. “And he really didn’t like the pace in the beginning when he couldn’t see things changing.

“I remember him standing up with the parallel bars, and he was in tears. He said, ‘I’ve got to be able to do this by myself.’ And I said: ‘Bones, you concentrate on where we are today. We will build on that.’”

Fortunately, MRC has plenty of technology designed to help patients get to their feet long before they can bear their own weight. “Once he began to have trunk control, we used an overhead harness to lift him to standing for weight-bearing,” Pride said.

While he was happy to be upright again, Cossar struggled with the transition. “Being 80 years old, learning how to walk again was tough,” he said.

Despite the security of the lift systems, Cossar was leery about taking his first tentative steps—particularly since he towered over Pride. So he liked it when rehab tech Walter Jackson, a tall guy himself, was around to provide additional support.

“We could have all gone home as long as Walter was there,” joked Pride. “Any time Walter was our support person it put Bones at such ease.”

“Walter saved my life so many times,” Cossar said.

A modest man by nature, Jackson said Cossar “exaggerates.” But the two did bond.  “Walter was my best friend,” Cossar said. “I had breakfast with him every morning.”

“The support he got from his family was just phenomenal,” Pride said. “When they would see him doing something better or different, they were very encouraging.”

To be admitted to inpatient rehab, patients must be able to participate in at least three hours of therapy each weekday. And Cossar had to push hard to keep pace with his ambitious schedule.

Cossar steadily improved, eventually going from the parallel bars to a rolling walker. And Pride said he got further along than she initially thought possible.

“He was one of those patients that one day he turned a corner and began progressing like crazy,” she said.

“He was just getting to the point he was stable on his feet when he left,” Boyd said.

Cossar jokes that he spent “40 days and 40 nights” at MRC, working on his “deliverance.”

And his therapists were sorry to see their “one-of-a-kind” patient go.

“The first couple of days, I thought: ‘This man is going to drive me crazy,’ Boyd said. “But when he left, both MaryJo and I loved him.”

After inpatient staff laid the groundwork for walking, Cossar moved to Methodist Outpatient Therapy in Ridgeland to fine-tune his abilities.

“I got out of MRC on June 10 and started at Ridgeland June 12,” he said. “I went Monday, Wednesday and Friday for two hours and it was wonderful. The facility was so updated and the equipment was brand new.”

A vibrating platform known as the Power Plate is one of the clinic’s latest additions, and Cossar did many of his exercises on the equipment.

“There’s all kind of exercises you can do for balance and lower extremity strength on it,” said Lori Towery, one of two physical therapists who worked with Cossar at the clinic. “The vibration causes the muscles to respond more quickly, so it’s more efficient than if you did squats without the vibration.”

Cossar had told his therapists he hoped to tee off again by October. And to accommodate the deadline, they focused heavily on strengthening his weakened ankles and core.

“To swing a golf club, he had to be able to stand and shift his weight evenly without losing his balance,” explained physical therapist Lindsey Oakley.

“And the ankle is one of the most important components for balance from a physical standpoint,” Towery said.

“We would go outside and utilize uneven areas to chip and putt,” Oakley said.

By the time Cossar left the Ridgeland clinic, he was proud of his impressive progress.

“When I got there, I could last two minutes on the stationary bike and then I’d have to rest,” he said. “And on the rickshaw (weight machine) I could do 20 reps at 30 pounds.

He’d also reclaimed his driving skills, and there was little doubt he’d soon be headed for the golf course.

“After I played my first round of golf, I showed the scorecard to them (MRC staff) and everyone in there was crying,” he said.

Oakley wasn’t there to share in that emotional moment, but she had to smile when she found the scorecard on her desk the next day.

“The first thing he had said to me is I want to get back on the golf course,” she said. “So that was one of those gratifying PT moments.”

'The Lord was watching out for me': Flora hunter grateful to be walking again after suffering several fractures in 22-foot tree stand fall
Country strong: Through therapy at MRC, Kalyn Smith strives to get back to the farm, back to college and back in the saddle after a life-changing horse-riding accident
‘I didn’t think I was going to live’: Coast retiree learns to adapt after paralyzing tree stand fall
Former Ole Miss running back tackles quest to walk again with trademark determination
Stepping up: Dr. Jennifer Villacorta named Methodist Rehabilitation Center’s new medical director
High achiever: MRC physical therapist receives 2019 ASIA Research Award
Faster and better: Methodist Orthotics & Prosthetics offers free screenings for Bioness L300 Go, an advanced neuroprosthetic device for controlling foot drop
‘I did what I was supposed to do’: Meridian athlete Alixus Hearn sets goals, gives it her all to overcome paralyzing spinal injury
‘Such a blessing’: For spinal cord injury survivor Brad Stubblefield and wife Kristan, having children has brought joy along with a unique set of challenges
Ready for Mayhem: Therapy at MRC helps Ridgeland cyclist bounce back from spinal cord injury to ride in annual Mayhem Century Ride
Web design and hosting by U.S.NEXT