‘They’re family to us’: As Methodist Orthotics & Prosthetics opens its eighth clinic in Biloxi, longtime patient happy to see them set up shop closer to his home 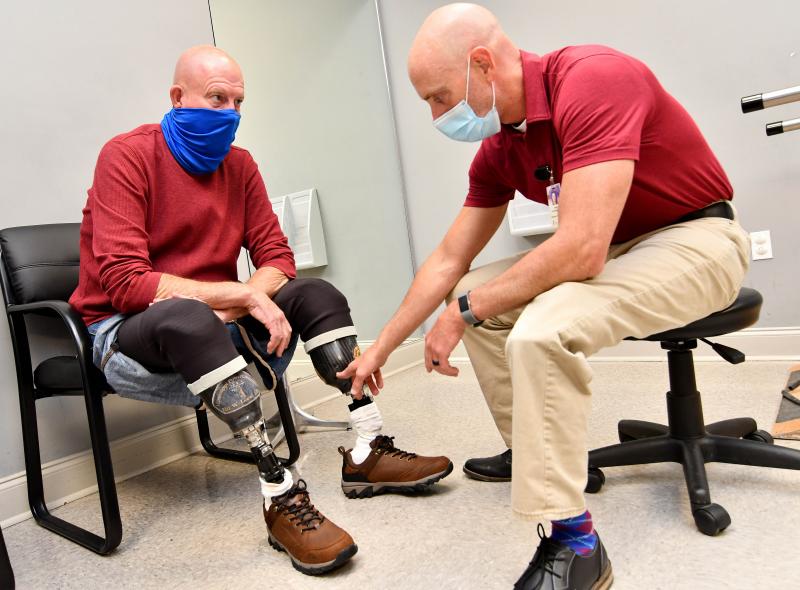 Methodist Orthotics & Prosthetics prosthetist Brad Kennedy, at right, and Robert Schafhirt of Gulfport discuss possible adjustments to his left prosthesis that he began wearing in April. 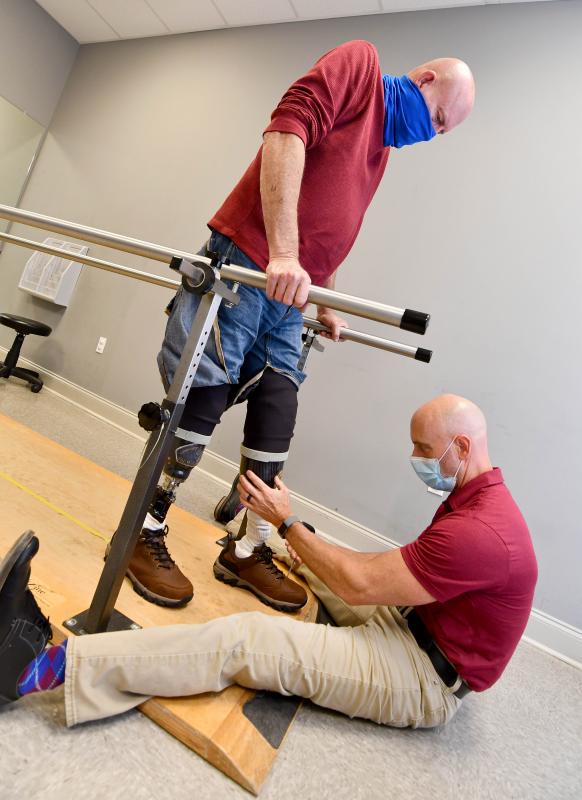 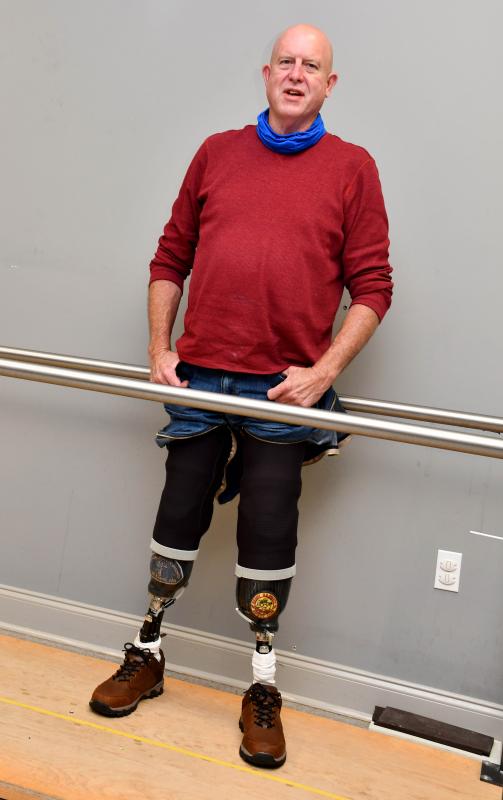 For over four years, Robert Schafhirt of Gulfport has been driving to Methodist Orthotics & Prosthetic’s Hattiesburg clinic for his prosthetic needs.

“We make a day trip of it,” said his wife, Sharon. “Your health is the most important thing, so we would have gone anywhere that’s right for him. And we know we’re with the right people.”

But now Schafhirt has an option closer to home. Methodist O&P has opened its eighth clinic in Biloxi to serve the Mississippi Gulf Coast. The Biloxi location joins clinics in Hattiesburg, Meridian, Cleveland, Oxford, Starkville, Monroe, La., and the provider’s flagship location in Flowood.

“In my mind, our ultimate goal is to provide access to O&P services to everyone in the state of Mississippi,” said Chris Wallace, director of Methodist O&P. “We knew there was a significant medical community on the Gulf Coast that we needed to serve.”

Robert, 67, had his first amputation below the knee in 2013. His first experience with a prosthetics provider close to home was “an ordeal,” he said. “I wish we had known about Methodist seven and a half years ago.”

Robert suffered from Charcot foot, which is a progressive condition that involves the gradual weakening of bones, joints and soft tissues of the foot or ankle. It so damaged his right foot that an amputation was necessary.

For over three years, Robert says he struggled with walking on his first prosthesis. He knew it just wasn’t the right fit, and it had begun to affect him both physically and mentally.

“I was going down the rabbit hole, I’m not going to lie,” he said.

Robert knew it was time for a change. His physician suggested he go to Methodist’s Hattiesburg clinic to talk with Brad Kennedy, a certified prosthetist who is himself an above-the-knee amputee.

“In the beginning, we just sat down and talked as friends, both being amputees with shared experiences,” Kennedy said. “We talked about his problems, most of which I’ve encountered at some point more than likely. We discussed options and solutions.”

“We fell in love the first visit, it was just like coming home,” Sharon said. “Brad understood what Robert was going through.”

Kennedy fit him with a completely new prosthesis that includes a hydraulic ankle that fit Robert’s active lifestyle. And he was soon able to walk proficiently for the first time in a long while.

“He was doing really well,” Kennedy said. “But he still had the Charcot foot. After I had been seeing him for a while it started to give him some problems in his left leg, which was making it hard for him to put weight on his sound leg and be able to use his prosthesis at all.”

Because he had been doing so well as a prosthetic user, his doctor recommended he get his left leg amputated below the knee to address the progression of his Charcot foot so he could remain able to walk.

“Sometimes you see people who have so many problems with their sound side that once they get a second amputation and get rid of the pain, it really lifts their spirits and they feel so much better,” Kennedy said. “That was definitely Robert.”

Robert’s left leg was amputated in February. In April, Kennedy fitted him with a prosthesis practically identical to the one he wore on his right leg. For him to be walking well today with two prostheses, just four months after surgery, is nothing short of phenomenal, said Kennedy.

“He tackled it head on,” Kennedy said. ‘He hit the floor running, so to speak. He has just done outstanding. It’s impressive when someone with a single amputation can bounce back that quick, but for him to become bilateral and hit it that quick it’s incredibly impressive.”

Kennedy will also see patients at the new Biloxi clinic, along with Hattiesburg clinical manager and certified orthotist/prosthetist Keith Frost. He says he looks forward to serving his patients closer to their homes.

“I feel fortunate that I’ve had patients willing to travel to see me,” Kennedy said. “When you can find somebody that you can work with, it’s a lifelong friendship because you’re always going to wear out prosthetics and need assistance with them. The new office gives me the ability to be local and available for the people there that need our services, or even those like Robert that feel like they need a change.”

As for Robert, he’s looking forward to getting back to activities like fishing in his boat using his new prosthesis. And he and Sharon are happy that if any new problems arise, he won’t have to go far for help.

“Methodist coming to Biloxi is just a godsend,” Sharon said. “The community needs someone down there that cares like they do. We’ll go there when we need to, but we’ll always come back to Hattiesburg, too, because we love seeing everyone.”

“They’re family to us,” Robert said.

Methodist Orthotics & Prosthetics is hosting an open house and ribbon cutting on July 15 from 11 a.m.-1 p.m. The clinic is located at 993 Tommy Munro Drive, Suite A, in Biloxi. For more information, call 228-220-3050 or visit methodistoandp.org.

"I didn’t want it to beat me": After a mountain bike accident led to an amputation, Step Morgan gets back to his active lifestyle with the help of Methodist Orthotics & Prosthetics
‘Such a hard worker’: After losing his leg in an on-the-job accident, J. Carmen Arevalo of Pearl applies his work ethic to learn to walk with a prosthesis at MRC
Ingenuity in action: Methodist O&P in Flowood answers call to create face shields during COVID-19 crisis
Realized potential: Despite setbacks and two amputations, Hank Graham achieves his goal of becoming an active prosthetic user
Faster and better: Methodist Orthotics & Prosthetics offers free screenings for Bioness L300 Go, an advanced neuroprosthetic device for controlling foot drop
Starkville clinic to mark seventh Methodist Orthotics & Prosthetics location
Web design and hosting by U.S.NEXT