Published on January 15, 2020
By Susan Christensen 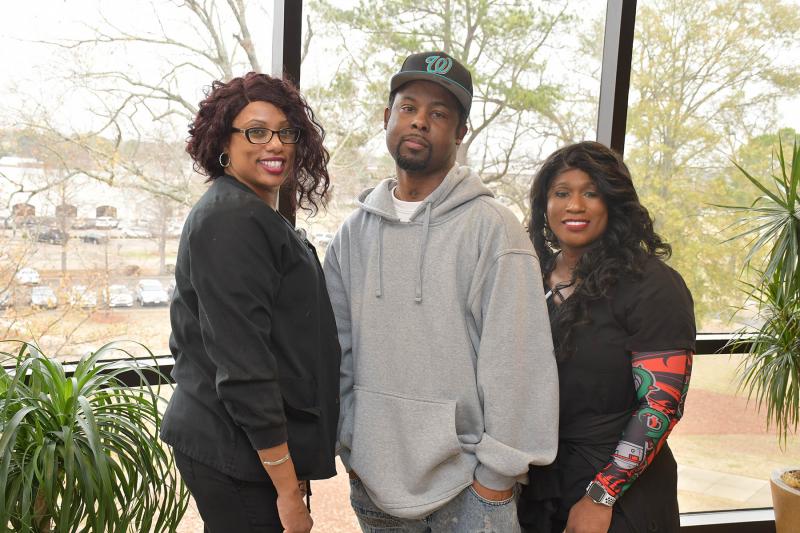 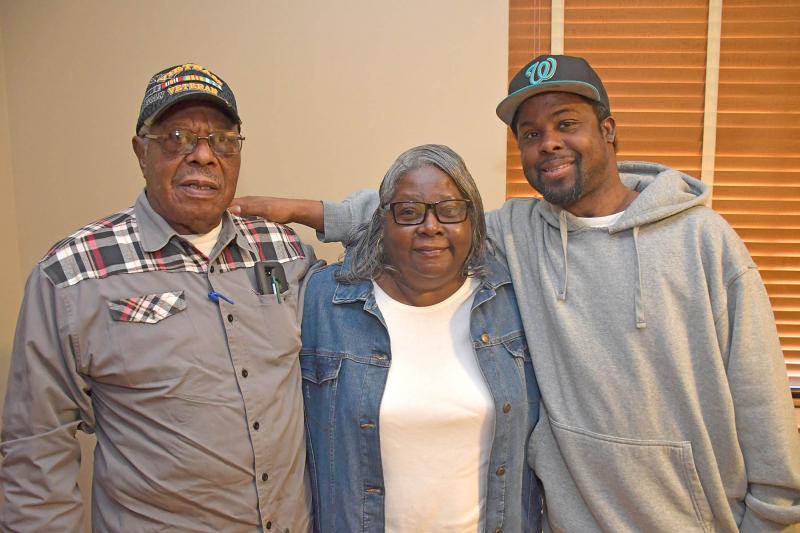 Michael Jordan’s parents Willie Johnson and Mary Jordan are happy to have their son back in Greenwood. A rare neuromuscular disease caused him to spend months at Methodist Specialty Care Center, a residential facility for people with severe disabilities. 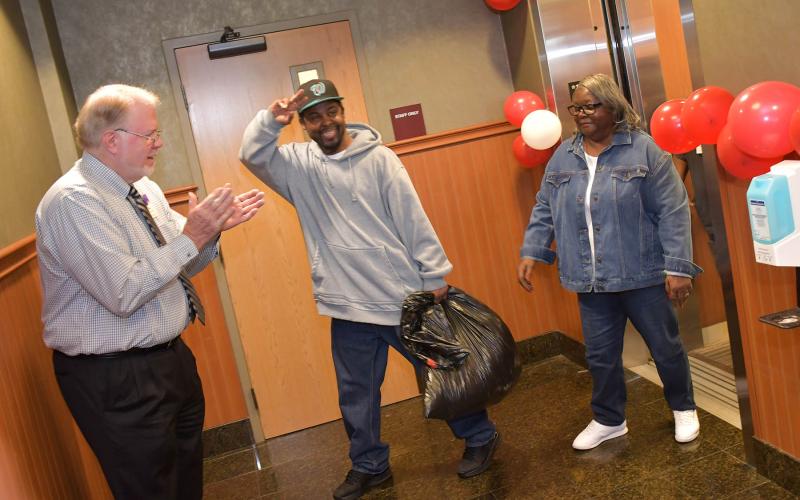 Larry McKnight, vice president of long-term care for Methodist Rehabilitation Center in Flowood, was among a crowd of well-wishers who greeted Michael Jordan and his mother, Mary Jordan, as they prepared to leave Methodist Specialty Care Center. 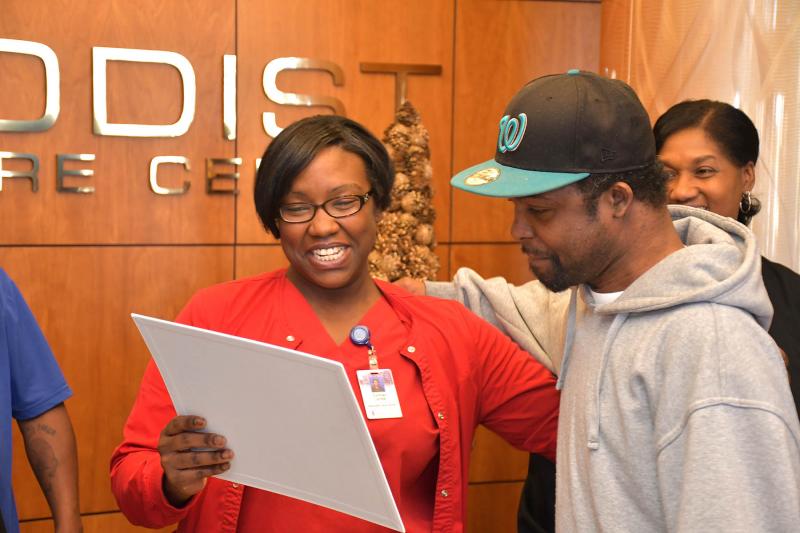 Michael Jordan of Greenwood was never supposed to make it home for the holidays.

Tethered to a ventilator and unable to walk, the 40-year-old seemed destined to live out his life at Methodist Specialty Care Center in Flowood.

The residential care facility is designed for the severely disabled, and Jordan knew he needed the center’s expertise. Still, he couldn’t imagine a future so far from family.

“I was depressed and I wanted to give up,” he said. “But the big man above wouldn’t let me give up.”

Neither would the caregivers at MSCC. “They motivated me to keep on fighting the good fight,” he said. And on Dec. 18, they were by his side as he celebrated his success.

Six months after arriving at MSCC via a power wheelchair, Jordan wiggled through a crowd of well-wishers and headed out the door on his own two feet.

Jordan was obviously moved as he returned hugs, handshakes, fist bumps and tremulous smiles. And the staff got choked up, as well.

Dramatic recoveries are rare in places that serve people with quadriplegia, brain injury, ALS and the like.

So, “it was a very good day to be in health care,” said Larry McKnight, vice president of long-term care for Methodist Rehabilitation Center, the Jackson hospital that opened MSCC in 2004.

When Jordan arrived at MSCC in June, his condition had so far denied an exact diagnosis. But there was no mistaking its impact. His once strong muscles had gone on strike, forcing him to rely on a machine to breathe, a wheelchair to move and a feeding tube to eat.

Jordan said his decline began about two years ago with a crippling fatigue.

“I just got weaker and weaker,” he said. “I’d get up in the morning and walk to the bathroom, then I’d have to sit down for five minutes. Every little thing, I had to take a break.”

He told himself he just needed to stay active and work out. “But I never had the energy,’’ he said. Or the strength.

“I couldn’t even do one push-up, and I knew something was wrong. But I was scared to go to the doctor.”

His mother, Mary Jordan, finally got him to Greenwood Leflore Hospital on Jan. 21.

“They said if I had come in a couple of days later, I would have died,” he said.

“It was panic time, and I had to pray real hard because this might be the end,” Mary Jordan said.

When his sickness first started, Jordan’s mother had been told her son “had the heart of an old man.”

“I thought that was what was weighing him down,” she said. But when medical tests couldn’t pinpoint the root of Jordan’s problems, he was transferred to an ICU at the University of Mississippi Medical Center in Jackson.

By mid-March, he was back at Greenwood Leflore with no exact diagnosis. His status was still unchanged in June, so he was moved to MSCC.

“We are considered the premier facility in the state for vent-dependent residents,” McKnight said. “Our staff probably gets more experience on a daily basis with ventilators than a regular nursing home would have in a lifetime.”

If Jordan was ever to return home, he’d need the expertise of MSCC’s respiratory therapy staff to help him breathe on his own again. But first someone needed to solve the mystery of why he was so sick in the first place.

As an affiliate partner with UMMC, Methodist Rehab has access to a variety of specialists at the state’s only academic medical center.

And MSCC Medical Director John Wofford was adamant that Jordan keep follow-up appointments with UMMC staff. “I wanted him to go because it wasn’t clear what he had,” Dr. Wofford said.

Jordan ended up in the hands of Dr. Saurabh Shukla, a newly arrived neurologist at UMMC. And the young physician’s passion for solving medical puzzles provided a breakthrough.

“I’m always on the lookout for something reversible,” Dr. Shukla said. “If something is treatable, you don’t want to miss out on that.”

Dr. Shukla said meeting Jordan for the first time was troubling. “A 40-year-old person with a trach, it’s devastating to see that,” he said. “And the hospital had worked so hard and hadn’t yet found a cause.”

As he combed through Jordan’s extensive medical records, Dr. Shukla could see why his case was confusing.

There were signs that congestive heart failure might have led to his lung problems. Or that his time in ICU had resulted in critical illness myopathy, a disease of the limb and respiratory muscles characterized by widespread muscle weakness and a failure to wean from mechanical ventilation.

Doctors had also suspected myasthenia gravis (MG), a chronic autoimmune neuromuscular disease that causes weakness in the skeletal muscles. But lab tests didn’t confirm the most common form of the disease.

According to the National Institutes of Health, the condition primarily affects muscles that control eye and eyelid movement, facial expression, chewing, talking and swallowing. The symptoms didn’t exactly fit Jordan’s experience, but Dr. Shukla recognized a pattern he’d seen before.

Jordan’s problems with breathing, swallowing and shoulder weakness reminded Dr. Shukla of MuSK myasthenia gravis (MMG). It’s a rarer form of MG that impacts about 5 to 8 percent of people with the disease.

“I’ve seen five cases here, and when I was a neuromuscular fellow in Miami and neurology resident at Harvard, I had about 15,” said Dr. Shukla, who is board certified in general neurology, neuromuscular medicine and electrodiagnostic medicine.

And sure enough, when Dr. Shukla tested for MMG, the results confirmed his hunch.

Dr. Shukla prescribed steroids and a promising MMG drug called Rituximab, and the effect was dramatic.

“He told me the very first treatment, he could feel a change,” said Mary Jordan. “By the second treatment, I saw it in his face. He just started blossoming.”

“It has been really fun to see him get better,” Dr. Wofford said. “So many people out here aren’t able to get better, so he’s unusual.

“When his legs and arms got strong enough, he was walking down the hall pushing the wheelchair with his ventilator in it. You don’t see that every day.”

Eager to get off the breathing machine, Jordan began working with MSCC’s team of respiratory therapists. They took him from ventilator to tracheotomy tube to totally breathing on his own.

“He had his prayers and his faith, and we were aggressive with him,” said respiratory therapist Felisha Davis. “To see someone progress like that was amazing.”

“He came a long way, and were so happy for him,” said respiratory therapist Janisia Hutton. “He’s so young and still has a lot of life ahead of him.”

Jordan said he believes God has something in store for him, and he’s ready for a new journey.

“I hope I can give someone who might be going through the same thing I went through the opportunity to believe in our heavenly father above,” he said. “I’m blessed to see another day.”

And he’s more than happy to be back in Greenwood surrounded by the familiar comforts of home.

After months of being on a feeding tube, Jordan couldn’t wait to enjoy his mom’s cooking. “I love her lasagna,” he said. “She makes it from scratch, and it’s super good.”

Mary Jordan said she spent the days before her son’s MSCC discharge decorating the house for Christmas and preparing his favorite foods.

But in her son’s eyes, having her company was enough. “She’s my heart,” he said.