'I very easily could have died': After close call with COVID-19, Indianola doctor helps MRC gather data on long-term impact of disease

Published on November 11, 2020
by Susan Christensen 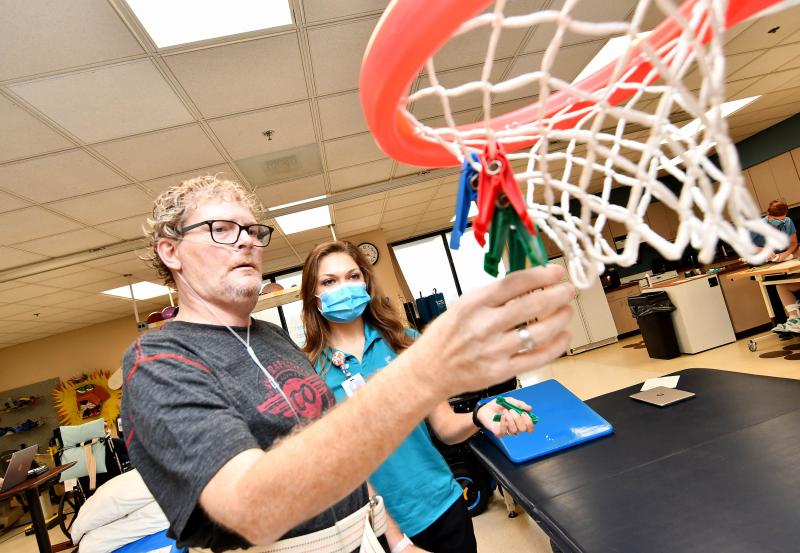 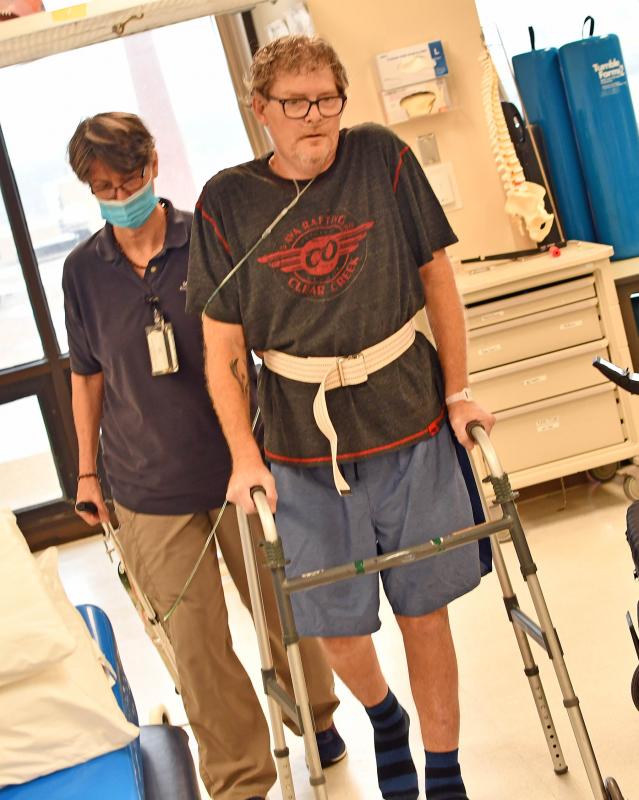 Dr. Michael Montesi practices walking under the guidance of Mary Smith, a physical therapist at Methodist Rehabilitation Center in Jackson. 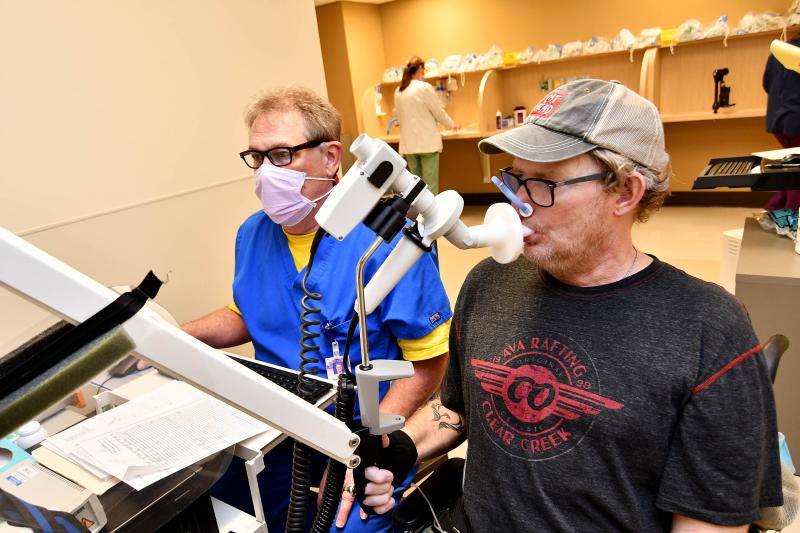 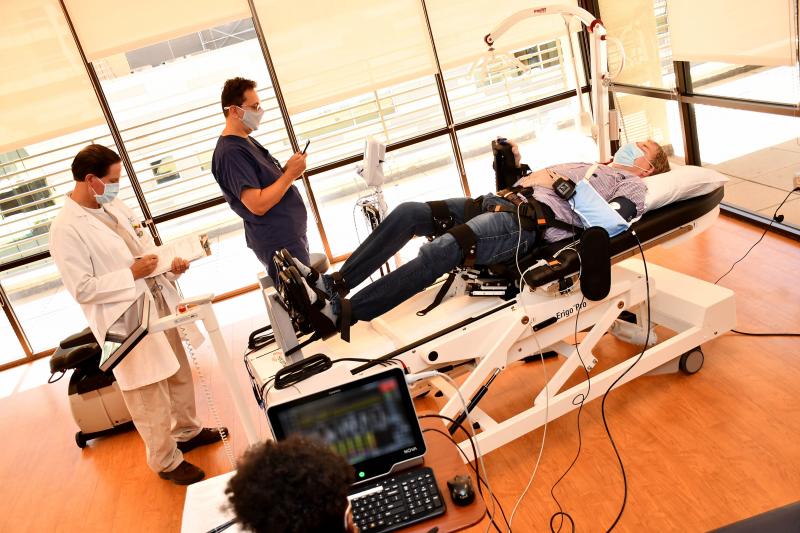 As he uses an ErigoPro—a device that combines a tilt table, functional electrical stimulation and robotic leg movements—Dr. Michael Montesi is monitored by Methodist Rehabilitation Center scientists Dr. Art Leis, left, and Dr. Dobrivoje Stokic. The researchers hope to define how physical activity in post-COVID patients changes oxygen saturation levels from lying down and resting to being upright and stepping because of reports of a drop in oxygen by therapists.

A Code Blue used to send Dr. Michael Montesi running to help a patient in distress.

But on July 26, the alarm brought people dashing to save his life.

“I don’t remember any of it,” he said. “They found me on the floor face down, and then I went into respiratory arrest. They called the code because I had stopped breathing, and they didn’t know if my heart had stopped.”

“He arrived there on 100 percent oxygen, he wasn’t using his lungs at all,” said his fiancée Ryan Schiefer.

Today, Montesi is back home in Indianola, enjoying the company of Schiefer and visits from his daughters, Anna Peyton, Hayden and Maggie Claire. And don’t think he doesn’t realize what a gift that is.

“One of my buddies saw the initial CAT scan of my lungs and said he hadn’t seen one so bad. It was completely whited out. My oxygen was so low at times, I don’t know why I don’t have an anoxic brain injury.”

Montesi had Acute Respiratory Distress Syndrome, a type of lung failure related to excess fluid and inflammation in the lungs. While he’s better now, he wonders when he’ll overcome the lingering effects.

That doesn’t surprise neurologist Art Leis, a senior scientist for MRC’s Center for Neuroscience and Neurological Recovery. “These patients have these precipitous drops in oxygen saturation levels with almost any physical exertion,” he said.

As a rehab hospital that does research, Leis said MRC may be able to help determine why it happens.

Among its research tools is the ErigoPro, a robotic device that combines a tilt table, functional electrical stimulation and robotic leg movements. Leis said the equipment can test whether the drop in oxygen level is related to being upright or being active.

“This is the type of stuff we have to define better,” Leis said. And he’d like to see the formation of a COVID-19 support group as a resource to find answers. “This is going to be needed because thousands of people are now labeled as COVID-19 ‘long-haulers.’”

The term describes COVID-19 patients who suffer lingering symptoms long after the acute stage of the disease. And Leis said it resembles what he has seen among patients who have had severe West Nile virus infections.

Leis, MRC Research Director Dobrivoje Stokic and Parminder Vig, a professor of neurology and biochemistry at the University of Mississippi Medical Center, recently submitted an article based on a review of publications on corticosteroid use. They compared corticosteroid doses prescribed for COVID to those used for other RNA viruses and autoimmune disorders.

“The take-home message is we’re proposing to use doses of corticosteroids that are magnitudes higher than what is currently being used,” Leis said. And he said the dose should be given after COVID antibodies become detectable in the blood.

“We believe this can be a successful treatment strategy that warrants further investigation,” he said.

As a physician and COVID-19 survivor, Montesi is all for anything that helps patients avoid the debilitating impact of the disease. “The only thing I could move was my head a little bit,” he said. “I was supine, and I couldn’t do anything about it.”

That didn’t sit well for someone used to being the fix-it man for his family and patients. So despite not being able to talk or walk, he tried to sign himself out of Baptist. “I set up some home health using Siri and called a buddy to pick me up,” he said.

The stunt earned him an earful from an ICU nurse. “She said: ‘After everything we’d done for you?’ It was tough love.”

In his defense, Montesi hadn’t realized what spending 27 days on a ventilator and in an induced coma had done to his 50-year-old body.

When he moved to MRC on Sept. 2, he was 40 pounds lighter and “essentially a limp body.”

“I had to be lifted from the bed into a chair for the first week,” he said. “From where I came to where I am now is amazing. I credit a lot of that to the therapists, just the intensity of the therapy, the encouragement of the staff and the program itself.”

Montesi said he knew MRC’s medical care was top-notch, having sent a number of patients there to recover from strokes and other debilitating illnesses. Yet it was an adjustment to take orders from a team intent on extracting every gain possible.

“I’d have to put 50 pegs in holes and then take them out with tweezers that were like salad tongs,” he said. “I always told her she was the meanest person I ever met. And she just goes, ‘Yep.’

“But to do that was a milestone for me—to actually grasp something and have my hands work.”

As his hands, arms and shoulders grew stronger, Montesi slowly began reclaiming his ability to feed, dress and bathe himself.

“He progressed to using adaptive equipment for grip assistance,” Dyess said. “By discharge, he was walking around his room and completing everyday tasks without assistance. His hard work and determination to improve was truly inspiring.”

And that progress put him in the position to excel in physical therapy, too.

“That’s what got him where he could push up on a walker,” said physical therapist Mary Smith. “Having his upper extremity function improve was important to progressing to walking and coming up to standing.”

Montesi said being vertical for the first time literally took his breath away.

“I was so short of breath, I had to sit back down,” he said. “But I stood up and we recorded it. And I said: ‘Let’s do it again.’ I had not stood up at that time for almost two months. So it was like, ‘Holy cow, the world looks different from 6 feet above the ground, because I had been 3 feet off the ground for a long time.’”

Smith said Montesi was determined to “get back to his life,” so she and Dyess gave him as much extra therapy time as possible, plus exercises to do in his room.

“He had worked hard all his life and the same was true with therapy,” Smith said.

“I would look at what my kids had been through and what Ryan went through watching me for a month, and I couldn’t let them down,” Montesi said.

When he left MRC after five weeks, Montesi could walk 1,000 feet. “The only thing limiting me now is my lungs haven’t recovered,” he said.

As Montesi pushed to improve his strength, endurance and lung volume, Cameron said she could “see the doctor in him.”

“He was encouraging other patients, and they absolutely loved it,” she said. “He probably has a very good bedside manner and spends time talking to his patients.”

It’s too soon to tell if or when Montesi will be able to resume his practice.

“The outcome is unknown at this time given the novelty of the virus,” said Dr.  Hyung Kim, his physician at Methodist Rehab. “From a functional standpoint, he made a very good recovery, walking and doing his activities of daily living at an independent level. But he still had pulmonary issues and continued to get short of breath after activities.”

Still, Montesi feels it would be ungrateful to complain. The day he transferred to Jackson, two other COVID-19 patients made the trip from Bolivar County. Neither survived.

“People look at me and say I’m fine,” Montesi said. “But I very easily could have died. I asked Ryan: ‘When did you know I was going to live?’ She got real teary and said almost a month.

“That I survived had a lot to do with the physicians who treated me. And as far as I’m concerned, God has a plan for me. If I sit long enough, God will tell me where I need to be. I’ve just got to listen.”

“My life is nothing like it was”: Nine months post-COVID, Terry woman still pushing to overcome lingering effects of virus
“I want to do what I love to do”: Northwest Rankin teacher back in classroom after therapy at Methodist Rehab helps her overcome post-COVID symptoms
“He might not make it”: Methodist Rehab helps 24-year-old overcome damage left by life-threatening case of COVID-19
“He knows what he’s talking about”: Doctor who leads Methodist Rehab’s Recovery After COVID Clinic is fellow survivor of virus
Pearl woman continues to teach therapeutic horse riding with help of Parkinson’s therapy
Facial muscles on the fritz?: Physical therapy offers treatments to ease symptoms of Bell’s palsy
‘I don’t think that disability should matter’: MRC’s Quest program helps Indianola woman born with cerebral palsy get back into the workforce
The little things: Assistive Technology Clinic fits Jackson teen Adam Malone with advanced robotic arm to help weakness caused by muscular dystrophy
‘It scared me so bad’: Rare disease leaves Louisville teen tackling paralysis
“A lot to come back from”: After surviving COVID-19, Jackson woman turns to Methodist Rehab to help overcome debilitating impact of the disease
Web design and hosting by U.S.NEXT