“A lot to come back from”: After surviving COVID-19, Jackson woman turns to Methodist Rehab to help overcome debilitating impact of the disease

Published on August 10, 2020
by Susan Christensen 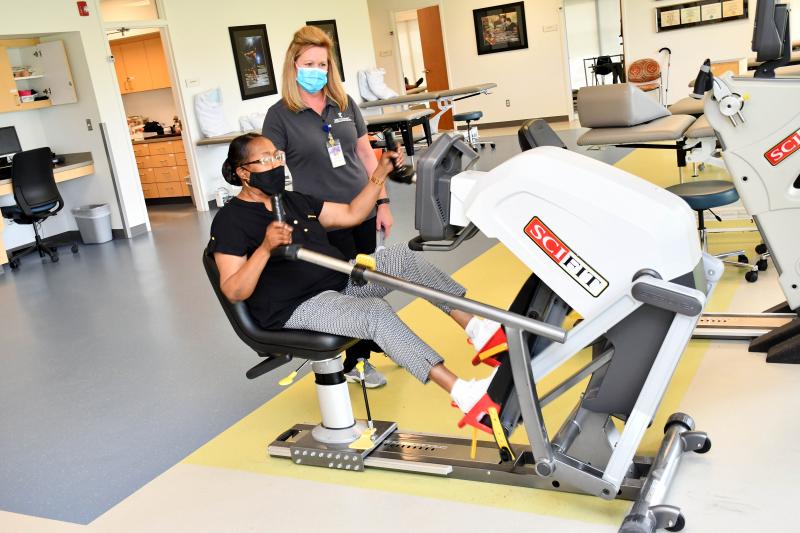 Under the watchful eye of Amy Macon, right, a physical therapist at Methodist Outpatient Therapy in Flowood, Tansy Rawls works to overcome debilitating weakness following a severe case of COVID-19. 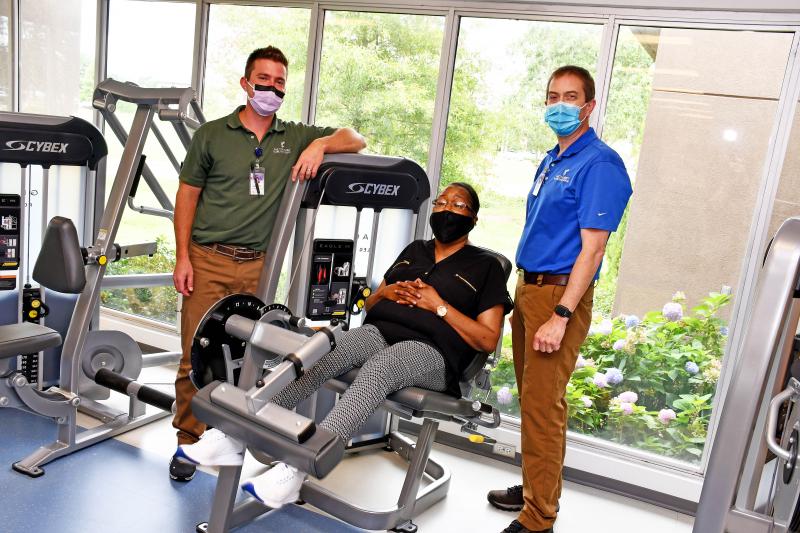 At Methodist Outpatient Therapy in Flowood, Physical Therapy Assistant Wes Myers, left, and Methodist Outpatient Services Director Joe Jacobson, right, are seeing the need for intense rehab therapy for patients like Tansy Rawls. “These people are in need, and that’s right in our wheelhouse,” Jacobson said. “We have a lot to offer from the standpoint of strengthening and endurance and assisting with a return to work.”

After being hospitalized with COVID-19 for 49 days, Tansy Rawls missed her own bed, her two dogs and food that didn’t come out of a hospital cafeteria.

So she initially resisted a transfer to Methodist Rehabilitation Center in Jackson.

“I did not want to go. I felt like it was time to go home,” said the 55-year-old Jackson resident. “But they convinced me. And it was the best thing, because I couldn’t do anything but stand up, really.”

Rawls left MRC walking on her own. But even after 12 days of intense therapy, she was still far from recovered. Like a lot of people hospitalized by the virus, she discovered there’s no easy comeback from COVID-19.

“Normally when someone previously healthy gets in respiratory distress, they jump back into health fairly easily and relatively fast,” said Dr. Jennifer Villacorta, medical director at MRC. “But we are seeing our post-COVID-19 patients recover a lot slower, the degree of debilitation being much more severe.

“That’s why a course of intensive therapy is always to their better advantage. They have a lot to come back from.”

Villacorta has seen the virus impact the vascular and neurological systems as well, causing complications like extensive blood clotting and cognitive decline. She said some patients have also presented like victims of a mild stroke. “Their thought process is notably and admittedly slower,” she said.

COVID-19 patients also can be susceptible to post-intensive care syndrome (PICU), which is defined as “new or worsening impairments in physical, cognitive or mental health status arising after critical illness and persisting beyond acute care hospitalization.”

Given rehab medicine’s long history of treating stroke, brain and spinal injuries, MRC already had the expertise to help post-COVID-19 patients overcome such conditions. Its therapists also frequently treat debility, the disabling muscle weakness and reduced heart and respiratory function that can strike those who’ve been bedridden.

Realizing that many COVID-19 survivors will need ongoing treatment in outpatient settings, the journal Physical Therapy recently issued guidelines for providing that care. And Joe Jacobson, director of Methodist Outpatient Services, said staff at MRC’s clinics in Flowood and Ridgeland are ready to be of service.

“These people are in need, and that’s right in our wheelhouse,” Jacobson said. “We have a lot to offer from the standpoint of strengthening and endurance and assisting with a return to work.”

What’s more, several of MRC’s therapists have specialized certifications in neurological rehabilitation. And at Methodist Physicial Medicine, Dr. Philip Blount is available to evaluate the condition of post COVID-19 patients and prescribe a recovery regimen.

Counseling services are also available through MRC to help patients deal with the fallout of such a frightening disease.

“That close brush with death is an enormous thing to experience,” Villacorta said. “And these patients have to go through that being and feeling pretty much alone, not being able to have visitors in the ICU.”

“You feel like you are in prison,” Rawls said. “You can’t see family … but it gives you a lot of time to talk to God.”

Rawls spent 22 days on a ventilator, and it was literally nightmarish. The whole time she had vivid dreams of people trying to kill her. Turns out, the disease nearly did.

“I had kidney failure, heart failure, lung failure— it tried to take me out,” she said. “I really think my dogs are what saved my life. I knew no one would treat them like I treat them or love them like I love them.”

Because she lives alone, Rawls said there was no one around to recognize her initial COVID-19 symptoms. She thought her extreme fatigue was the result of a recent treatment for multiple sclerosis.

“I was so unbelievably weak. I have stairs, and I had to sit down before I got to the bottom. After four or five days, I thought it was going on too long, but I’m stubborn. And I don’t like hospitals anyway. So I procrastinated. A friend on the phone said you are breathing funny, and you need to be checked.  I was like, I’ll go tomorrow. But she said: ‘If you don’t go today, I’m going to call an ambulance.’ So I said I’d go.”

While she waited in an urgent care center parking lot for her turn to be seen, Rawls said she must have blacked out. “When I got inside, they said they had called me twice. My temperature was like 104, and I never felt it at all. I think that was like a Friday and by Sunday I was on a ventilator.”

Rawls has no idea when she was exposed to COVID-19. “I was wearing gloves and using hand sanitizer, but I’ve never been big on masks because they made me feel funny,” she said.

Now, she won’t leave home without one. “I am paranoid,” she said. “I will have a mask on even if somebody comes to my house. This stuff can kill you.”

Today, Rawls remains hard at work to regain more strength and endurance at Methodist Outpatient Therapy in Flowood. And she’s excited to be making progress.

“When I first started, I could only do about 5 minutes,” she said as she pedaled on an exercise bike. “Now I can do 15 minutes.”

Sometimes, even too hard, said physical therapist Amy Macon. “We have to pull her back a little bit because with multiple sclerosis it’s not a good idea to let her overdo. We have to find a balance of just enough, but not too much.”

Villacorta said those that are able to bounce back from COVID-19 are “the most grateful patients.”

And Rawls counts herself among the thankful. Now, she can’t imagine why she didn’t want to come to MRC in the first place. “It was the best thing,” she said. “At Methodist, they are so nice and kind to you. And they even have the best food.”

“My life is nothing like it was”: Nine months post-COVID, Terry woman still pushing to overcome lingering effects of virus
“I want to do what I love to do”: Northwest Rankin teacher back in classroom after therapy at Methodist Rehab helps her overcome post-COVID symptoms
“He might not make it”: Methodist Rehab helps 24-year-old overcome damage left by life-threatening case of COVID-19
“He knows what he’s talking about”: Doctor who leads Methodist Rehab’s Recovery After COVID Clinic is fellow survivor of virus
Pearl woman continues to teach therapeutic horse riding with help of Parkinson’s therapy
Facial muscles on the fritz?: Physical therapy offers treatments to ease symptoms of Bell’s palsy
‘I don’t think that disability should matter’: MRC’s Quest program helps Indianola woman born with cerebral palsy get back into the workforce
'I very easily could have died': After close call with COVID-19, Indianola doctor helps MRC gather data on long-term impact of disease
The little things: Assistive Technology Clinic fits Jackson teen Adam Malone with advanced robotic arm to help weakness caused by muscular dystrophy
‘It scared me so bad’: Rare disease leaves Louisville teen tackling paralysis
Web design and hosting by U.S.NEXT