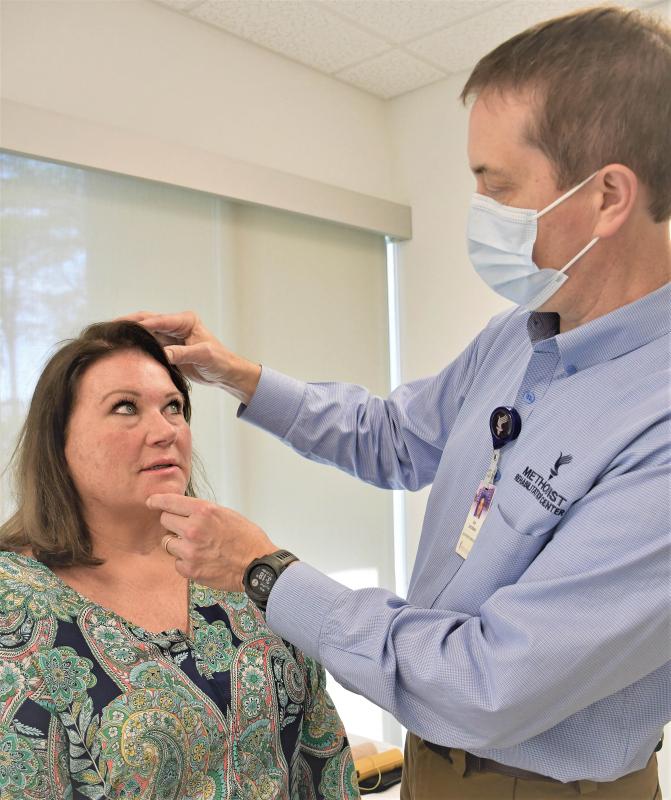 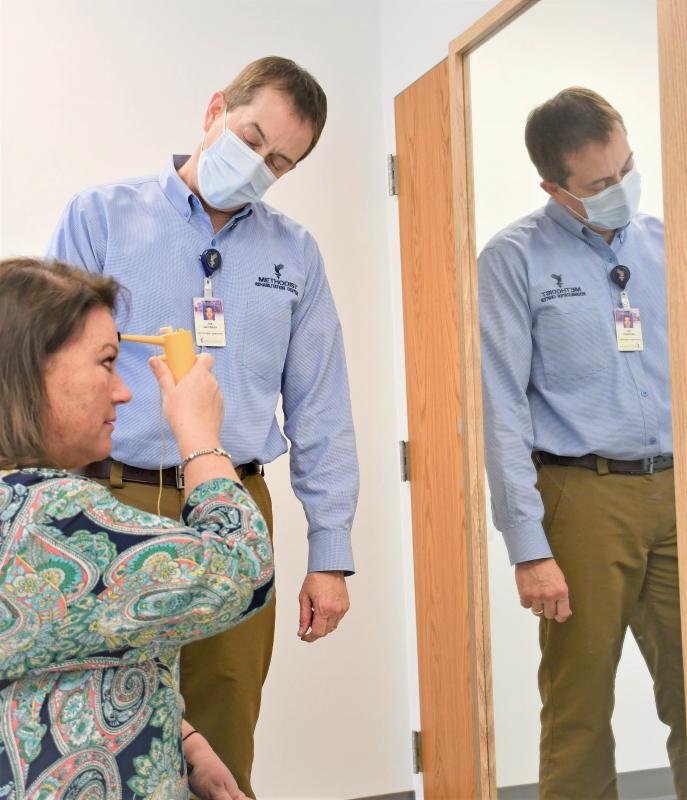 During therapy for Bell’s palsy, physical therapist Joe Jacobson shows patients like Trenton Miller how to use a device that delivers neuromuscular stimulation to specific points on the face.

As she brushed her teeth one morning in November, Trenton Miller noticed something odd.

Water was dripping from the left side of her mouth. By afternoon, her adjacent facial muscles were also on the fritz.

The symptoms could have signaled a stroke. But Miller was diagnosed with Bell’s palsy, a type of paralysis that temporarily freezes muscles in the face.

“I had no expression,” said the 52-year-old Madison resident. “It’s weird to look at yourself in the mirror and not be able to move your face as hard as you try.”

Doctors aren’t sure what sets off the nerve swelling and inflammation associated with the condition.

Treatment includes anti-viral and anti-inflammatory medications. Most people begin to get better within weeks and fully recover in about six months.

But as Miller can attest, there can be some agonizing moments along the way. “I had this wave of pain right behind my ear,” she said.

When a prescription for nerve pain didn’t bring relief, Miller turned to a physical therapy friend for advice. Her immediate counsel was: “Go see Joe Jacobson.”

The hands-on approach of manual therapy can relieve muscle spasms, release tension and improve flexibility in joints like the jaw. And it’s among several treatments that Jacobson uses to help people overcome debilitating head, neck and facial injuries.

For Bell’s palsy, Jacobson often turns to a device that delivers neuromuscular stimulation to specific points on the face. This helps relax spasms and re-educate the muscles.

“He’d put it on my face and pull the trigger and it shocks you,” Miller said. “You do 10 rounds of that on your face and up the intensity a little more.”

Jacobson also led Miller through a variety of oral exercises for the muscles that control facial expressions, such as pouting, puckering, smiling and frowning.

“Treatment-wise, we were not very aggressive because the muscles of the face are small and you don’t want to overwork or fatigue them,” Jacobson said. “I also used really gentle facial massage.

“In her case, it also affected her neck motion, so we did some stretching and soft tissue work. That’s really unusual for Bell’s palsy. I think it was because she was so uncomfortable that she wasn’t moving her head and neck, and it became stiff.”

Miller said she most enjoyed therapy sessions with a device called the Hivamat, which uses electrostatic waves to create deep, but gentle oscillations in treated tissue. “That was fabulous,” Miller said. “It was very relaxing.”

Jacobson said Miller was fortunate to be friends with Allison Fracchia, a physical therapist who had worked at MRC and knew there was more to Bell’s palsy treatment than just medication.

“Unless they see an ear, nose and throat doctor or neurologist, a lot of people don’t know that therapy exists for Bell’s palsy,” he said. “It’s typically one of those things for which people have to ask.”

And Miller’s glad she was proactive.

“When Joe entered my life, it was perfect timing,” Miller said. “It helped so incredibly much. I felt very cared for. He was so knowledgeable about everything.”

And she said there was at least one upside to having Bell’s palsy during the COVID-19 pandemic.

With mask-wearing being mandatory, her illness stayed mostly under wraps. “I guess if things were normal, I probably would have been a lot more self-conscious.”

“My life is nothing like it was”: Nine months post-COVID, Terry woman still pushing to overcome lingering effects of virus
“I want to do what I love to do”: Northwest Rankin teacher back in classroom after therapy at Methodist Rehab helps her overcome post-COVID symptoms
“He might not make it”: Methodist Rehab helps 24-year-old overcome damage left by life-threatening case of COVID-19
“He knows what he’s talking about”: Doctor who leads Methodist Rehab’s Recovery After COVID Clinic is fellow survivor of virus
Pearl woman continues to teach therapeutic horse riding with help of Parkinson’s therapy
‘I don’t think that disability should matter’: MRC’s Quest program helps Indianola woman born with cerebral palsy get back into the workforce
'I very easily could have died': After close call with COVID-19, Indianola doctor helps MRC gather data on long-term impact of disease
The little things: Assistive Technology Clinic fits Jackson teen Adam Malone with advanced robotic arm to help weakness caused by muscular dystrophy
‘It scared me so bad’: Rare disease leaves Louisville teen tackling paralysis
“A lot to come back from”: After surviving COVID-19, Jackson woman turns to Methodist Rehab to help overcome debilitating impact of the disease
Web design and hosting by U.S.NEXT