Published on September 29, 2020
By Susan Christensen 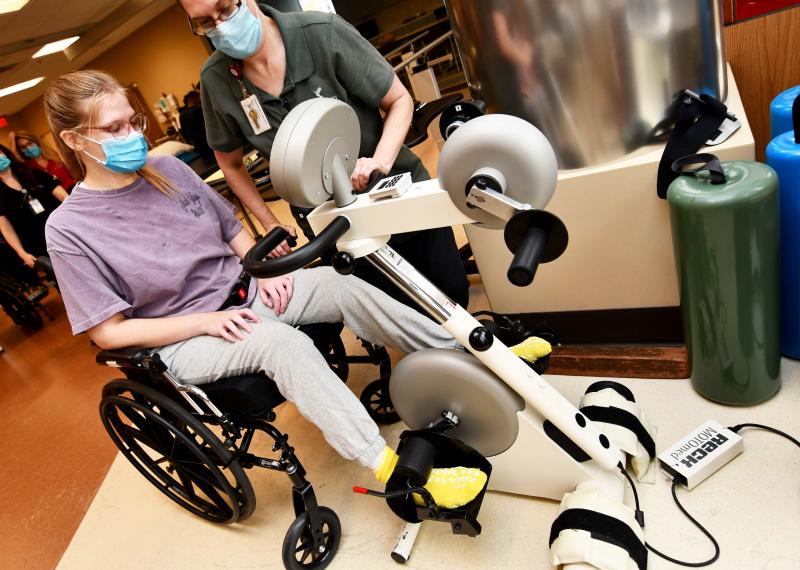 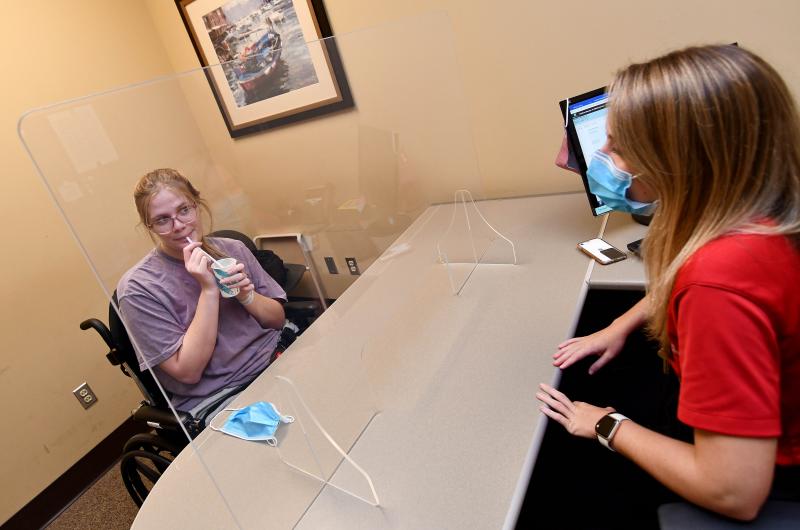 Because of the time she spent intubated and on a breathing tube, Morgan Trosper needed sessions with Methodist Rehabilitation Center speech therapist Hayden Coleman to improve her vocal intensity and loudness. “She made great progress with me and was such a joy to work with,” Coleman said. 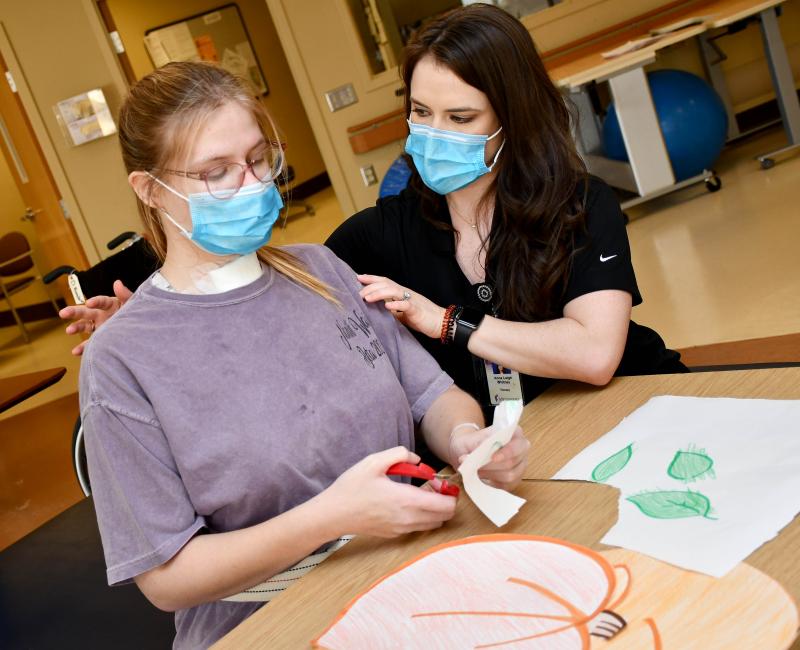 Anna Leigh Hanna, an occupational therapist at Methodist Rehabilitation Center in Jackson, guides Morgan Trosper as she did exercises to improve her hand function. “She only really had wrist movement,” Hanna said. “She didn’t have any grasp or dexterity.” 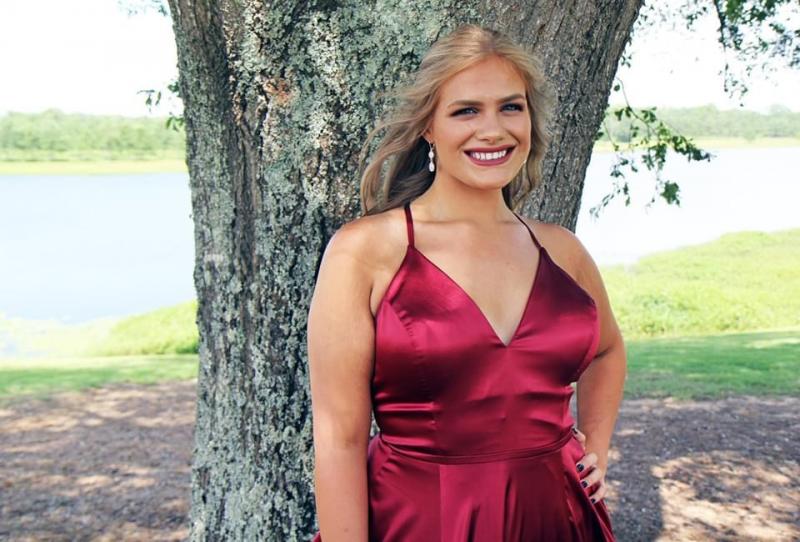 Just two weeks before falling prey to Guillain-Barre´ Syndrome, Morgan Trosper was the picture of health.

When Morgan Trosper shared a selfie on July 9, she didn’t know she was in the midst of a medical crisis.

The Louisville 17-year-old just felt funny and decided to tell her friends. “My body is doing something weird,” she typed. “My fingers, toes and tongue have started going numb.”

Initially, she wasn’t that alarmed. “You know how when your leg goes to sleep? That’s how it felt.”

But over the next several days, a crippling weakness began to progressively paralyze her limbs.

“It was hard for me to walk, I felt hot and exhausted,” she said. “It scared me so bad, I thought I had COVID. I was googling and diagnosed myself with so many things.”

Not on her radar was a rare disease that strikes only about one or two people per 100,000. Trosper had Guillain-Barre´ Syndrome, a neurological disorder that can swiftly paralyze even the healthiest of individuals.

“She was never sick before she got it,” said her mother, Tanya Johnson.

While the effects are temporary for many, the worst cases of the disease demand prolonged medical treatment.

By July 13, Trosper had been admitted to Batson Children’s Hospital in Jackson. She spent almost six weeks undergoing treatment there, including 34 days in ICU.

When it came time to start inpatient rehab on Aug. 25, Johnson had only one place in mind for her severely debilitated daughter.

“I wanted her to have the best of the best,” she said. And she’d learned that Methodist Rehabilitation Center in Jackson had extensive experience helping GBS patients recover.

Some 132 GBS patients have come to Methodist for rehab since 2000, and its scientists have also studied the disease. In 2016, Dr. Art Leis and Dr. Dobrivoje Stokic published a paper concluding there was no causal relationship between Zika virus and the variant of GBS that is presumed to cause paralysis.

GBS occurs when the body’s immune system attacks myelin, the insulation that surrounds and protects nerve fibers, said Dr. Leis, a neurologist and senior scientist at the Jackson hospital’s Center for Neuroscience and Neurological Recovery. The resulting damage temporarily disconnects communication between the brain and muscles.

“Most patients initially complain of loss of sensation or weakness in their feet,” Dr. Leis said. The numbness generally moves upward from the extremities, commonly referred to as an ascending paralysis. In the worst cases, victims become completely paralyzed and need mechanical help with breathing.

“The only thing I could move was my shoulders and neck,” Trosper said. Doctors had to intubate her on July 20 and put a tube in her throat on July 28.

Leis said about half of GBS cases are triggered by some type of viral or bacterial infection. “Typically it’s an upper respiratory viral infection, but it also can be a bacterial gastrointestinal disease,” he said. Vaccinations, stress and surgery also can be risk factors, as are conditions such as HIV, West Nile virus and even COVID-19.

Trosper has no idea what instigated her bout with the disease, but she was glad to get a definitive diagnosis on July 14. “When I didn’t know what it was, I was scared. My body had stopped working, and I didn’t know why.”

After her daughter’s diagnosis, Johnson said she felt hopeful. “I read about it online and it helped me because of the high recovery rates. I was never scared—even when she was intubated—that she was going to die. Maybe that was stupid of me. But I felt like it would get better, I just didn’t know when.”

Such treatments can prevent damage to the nerve fibers and lead to a better outcome. Trosper underwent both therapies, yet she arrived at Methodist with her future still uncertain.

“One of the challenges of managing GBS is it’s very difficult to predict,” said Dr. Jennifer Villacorta, Methodist’s medical director and Trosper’s physician. “You can’t assume a patient is not moving forward because the recovery can be slow at first.”

Trosper said she already knew she’d probably be in recovery for the long-haul. Against the advice of her doctors and parents, she’d been researching GBS online. What she learned was “it’s fast coming in and for it to leave, it would be slow.”

It wasn’t good news, but she took it in stride.

“Her behavior is very mature, despite all this,” Dr. Villacorta said. “Considering the extent of her symptoms, she has accomplished a lot to make herself more independent.

“Even on Day 1, you could see the motivation in her. Even though she couldn’t use her fingers, she was trying to show me pictures on her phone. It was a positive sign that she was not going to take this lying down.”

Once she got to Methodist, Trosper said she appreciated being pushed by physical therapist Kathleen Dobbs, occupational therapist Anna Leigh Hanna and speech therapist Hayden Coleman.

“Being there changed me for the better,” she said.

Since having a tracheostomy can impact the larynx, Trosper spent much of her time in speech therapy working on vocal intensity and loudness, Coleman said. “She made great progress with me and was such a joy to work with.”

Both occupational and physical therapy began with the basics, as Trosper had been basically bedridden for a month and half. “I probably got out of bed three times at Batson,” she said.

Now, it’s an everyday thing, but it took extensive therapy sessions before Trosper could even sit on her own.

“Her sitting balance has improved immensely,” Dobbs said. “And I’ve been working with her to be able to use a sliding board to transfer from her bed to her wheelchair.”

Over the course of her stay at Methodist, Trosper graduated from a power wheelchair to a manual model she can push herself. And she managed her first attempts at standing with the aid of a ceiling lift system.

In the interim, she’ll be using newly learned compensatory strategies to become more independent. When Trosper arrived, she couldn’t manage any self-care activities—from brushing her teeth to feeding herself—without help.

A big part of the problem was her hands were like those of a quadriplegic. “She only really had wrist movement,” Hanna said. “She didn’t have any grasp or dexterity.”

So the first order of business was to teach Trosper how to work with assistive devices, such as a toothbrush with a specialized handle that she could grip. As Trosper got stronger, Hanna introduced less dependent ways to address everyday tasks.

“We were always evaluating and modifying what she was doing,” Hanna said. “And she did make a lot of progress. When she left, she could put a shirt on by herself and propel her wheelchair. We also worked on core strength, balance and hand writing because she’s going back to school.”

Trosper has been doing online learning since Aug. 24. She hopes to return to classes at Nanih Waiya High School after the Christmas holidays.

As she prepared to head home from Methodist on Sept. 15, Trosper said she had mixed feelings. While she’s more than ready to be among family and friends again, “I’m sad I’m leaving,” she said.

“All the people at Methodist have been really nice. And they really know what they’re doing.”

“My life is nothing like it was”: Nine months post-COVID, Terry woman still pushing to overcome lingering effects of virus
“I want to do what I love to do”: Northwest Rankin teacher back in classroom after therapy at Methodist Rehab helps her overcome post-COVID symptoms
“He might not make it”: Methodist Rehab helps 24-year-old overcome damage left by life-threatening case of COVID-19
“He knows what he’s talking about”: Doctor who leads Methodist Rehab’s Recovery After COVID Clinic is fellow survivor of virus
Pearl woman continues to teach therapeutic horse riding with help of Parkinson’s therapy
Facial muscles on the fritz?: Physical therapy offers treatments to ease symptoms of Bell’s palsy
‘I don’t think that disability should matter’: MRC’s Quest program helps Indianola woman born with cerebral palsy get back into the workforce
'I very easily could have died': After close call with COVID-19, Indianola doctor helps MRC gather data on long-term impact of disease
The little things: Assistive Technology Clinic fits Jackson teen Adam Malone with advanced robotic arm to help weakness caused by muscular dystrophy
“A lot to come back from”: After surviving COVID-19, Jackson woman turns to Methodist Rehab to help overcome debilitating impact of the disease
Web design and hosting by U.S.NEXT