‘I don’t think that disability should matter’: MRC’s Quest program helps Indianola woman born with cerebral palsy get back into the workforce 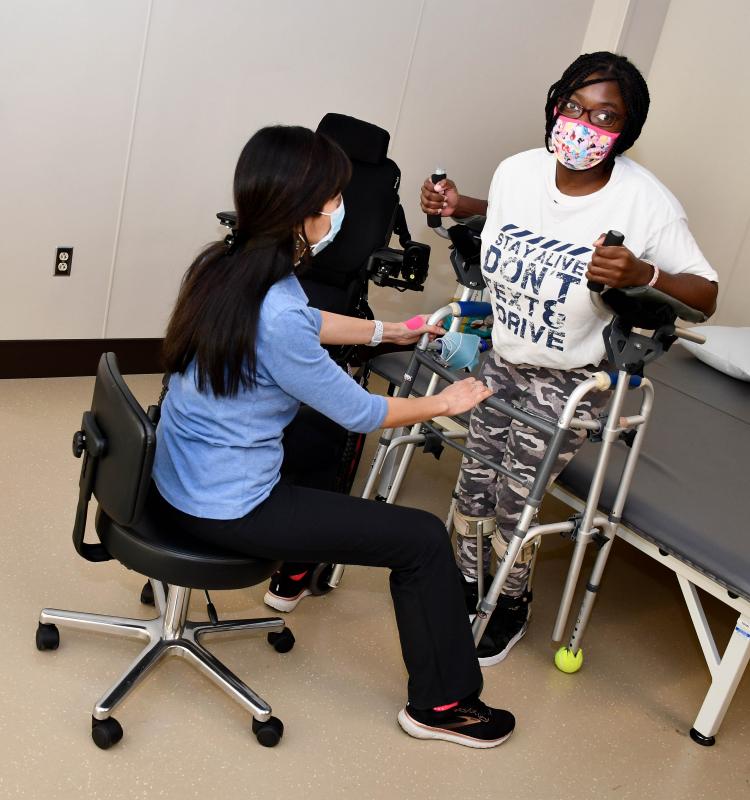 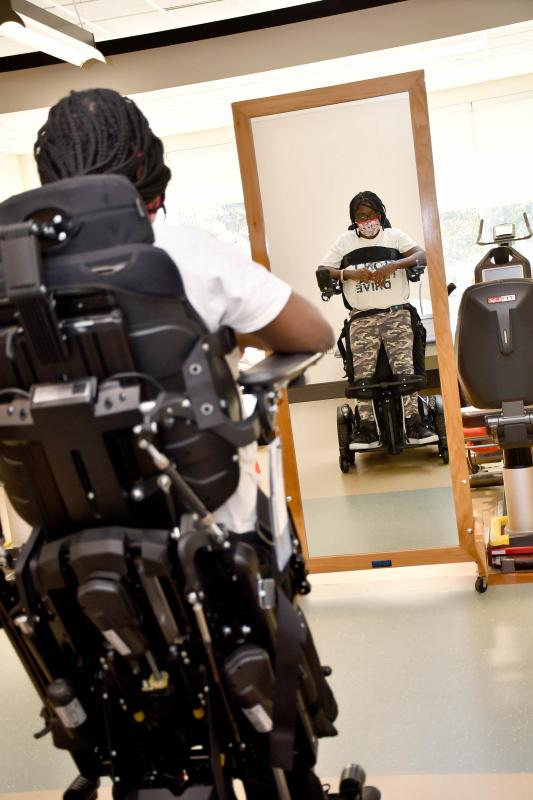 LaBrittany Knight practices her posture while standing upright in her standing wheelchair using a full-length mirror at Methodist Outpatient Therapy in Ridgeland. 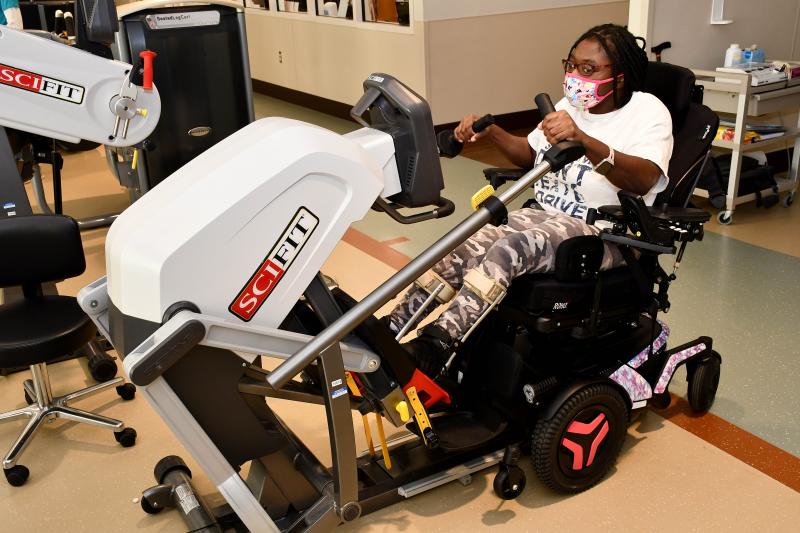 When you call customer service, you never know who that voice on the other end of the line could be.

It might be someone as cordial and devoted to helping as 27-year-old LaBrittany Knight of Indianola.

She works from home, answering calls for Whirlpool’s warranty services department from her wheelchair. Knight was born with cerebral palsy, a group of disorders that affect a person's ability to move and maintain balance and posture.

“I have a disability, but I don’t think that disability should matter,” Knight said. “Although, it does for some people. With my job, I’m thankful that they look past my disability.”

Knight recently graduated from Quest, Methodist Rehabilitation Center’s comprehensive outpatient program designed to help patients transition back to work, school or community life. Knight had recently earned her bachelor’s degree in information technology from Mississippi State University and was looking to further her career. She also wanted help with the often severe physical effects of CP.

“I learned about the program through vocational rehab, and I had prayed about finding something like it,” Knight said. “CP is chronic, so it’s not going to go away, but it can get better. And I didn’t want to be in pain. I was tired of hurting. The therapy has really helped a lot with that. Now I’m not in pain as much, I used to be in a lot of pain.”

Physical therapist Patricia Oyarce worked with Knight to meet that goal at Quest, which is located at Methodist Outpatient Therapy in Ridgeland.

“I first saw her in February,” she said. “Her goals for physical therapy were very specific. She wanted to be able to stand for two minutes, using either her walker or her braces. And it had been about two years since she had done any standing.”

“We worked on standing a lot,” Knight said. “I did not have a lot of strength in my legs when I first came here, but it’s been building. We concentrate on quality, not quantity. If I stand for two minutes straight up, that’s better than five minutes while bending.”

Soon Oyarce referred Knight to MRC’s Assistive Technology Clinic in Flowood, to see about getting some special equipment.

“We started using a standing frame, but with her goal of working, too, we decided to get her strong enough to use a standing wheelchair,” Oyarce said.

“It’s been shown that intermittent standing during the day in a standing wheelchair has more benefits than standing for a prolonged period once a day in a standing frame,” she said. “Any weight-bearing is good for maintaining or slowing down the decline in bone density. Standing in an upright position also helped with stretching and passive range of motion to her legs to increase range of motion in her ankles, knees and hips. But the main push was to increase her function in everyday life.”

Knight says it has definitely helped in that regard. “I’m blessed to have it,” she said. “I can reach the higher shelves in my house better now.”

Back at Quest, Knight worked with occupational therapist Allison Harris on her work goals.

“She came in motivated,” Harris said. “She really had a plan of what she wanted to do, beyond her therapy goals. After finishing college, she wanted to get back out and working again. I think she just needed us for an extra push in the right direction.”

“I had a lot of previous work experience,” Knight said. “I had worked for Disney, Barnes & Noble, Mississippi State and Hinds Community College.”

“I think she may win the prize for getting the most job offers,” Harris said. “She got four.”

Knight had even received an early offer for an in-person customer service position that was derailed when COVID-19 hit.

“She had gotten the job and was really pumped about it, but they just kept postponing things, so she decided to look elsewhere,” Harris said.

It’s somewhat of a coincidence that Knight got a work-from-home job just as millions of Americans transitioned away from office life in the wake of COVID-19. But Harris said a silver lining of the trend could be that more such jobs will be available for people with disabilities.

“If you’re someone who can’t drive and have to depend on others for transportation, working from home can be great,” Harris said. “I’ve been seeing more work-from-home jobs in the past three months than I’ve ever seen. And I think that is going to open up some opportunities for a whole lot of people.”

Although Knight graduated from Quest in November and met her initial goals, she says that’s just the beginning.

“I do want to go back to grad school, and I want to learn to drive,” she said. “My ultimate goal is to live independently.”

“My life is nothing like it was”: Nine months post-COVID, Terry woman still pushing to overcome lingering effects of virus
“I want to do what I love to do”: Northwest Rankin teacher back in classroom after therapy at Methodist Rehab helps her overcome post-COVID symptoms
“He might not make it”: Methodist Rehab helps 24-year-old overcome damage left by life-threatening case of COVID-19
“He knows what he’s talking about”: Doctor who leads Methodist Rehab’s Recovery After COVID Clinic is fellow survivor of virus
Pearl woman continues to teach therapeutic horse riding with help of Parkinson’s therapy
Facial muscles on the fritz?: Physical therapy offers treatments to ease symptoms of Bell’s palsy
'I very easily could have died': After close call with COVID-19, Indianola doctor helps MRC gather data on long-term impact of disease
The little things: Assistive Technology Clinic fits Jackson teen Adam Malone with advanced robotic arm to help weakness caused by muscular dystrophy
‘It scared me so bad’: Rare disease leaves Louisville teen tackling paralysis
“A lot to come back from”: After surviving COVID-19, Jackson woman turns to Methodist Rehab to help overcome debilitating impact of the disease
Web design and hosting by U.S.NEXT